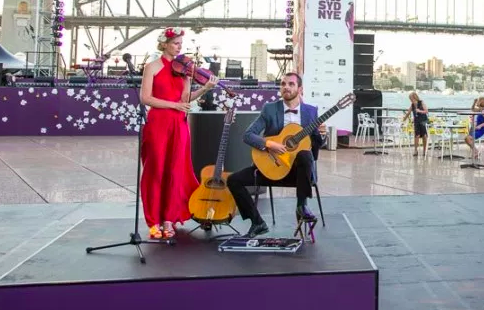 The Mimosa Duo at major event in Sydney

World class guitar and violin duo, the Mimosa Duo, will perform at the Avoca Theatre on October 20.

The Mimosa Duo will be releasing their third album at the Theatre. They play a virtuosic mix of delicate classical arrangements and upbeat Gypsy Jazz, yet they never forget to throw a few spin balls in between. Mimosa Duo have performed internationally and all over the country, they have a large and enthusiastic following and draw incredible crowds to their festival performances. The Mimosa Duo consists of Phoebe and Morgan Haselden on the violin and guitar. They were both trained at the Sydney Conservatorium in classical music, but have been making their own way, in a big way, since their graduations eight years ago.

Mimosa perform numerous times a year as guest entertainers on luxury cruise liners, they have performed on the Opera House main stage and at multiple festivals, they spent six months performing in France in search of the heart of Gypsy Jazz and have toured New Zealand. What they love most is to perform in their homeland Australia, in community based establishments like the Avoca Theatre Phoebe and Morgan are fantastic musicians in their own rights and have performed with a plethora of top notch Sydney based musicians. The music truly flows from their fingertips, and when they perform together they lock in tight with impeccable timing. They also create unique arrangements of different pieces that highlight their own talent and the wonderful range of styles the guitar and violin can perform in together.