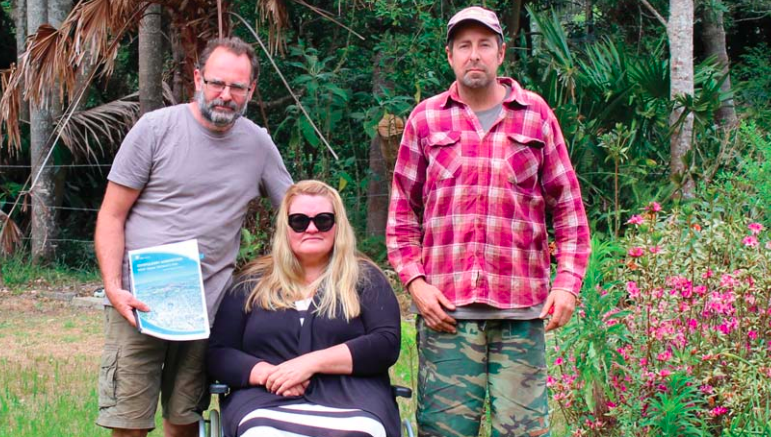 Mr Chris Taylor with partner Karena and brother Paul questions the :”just terms” of the compensation offered for their land

The proposed NSW Government inter-city rail maintenance facility to be built on flood prone and environmentally sensitive land at Kangy Angy could also have a significant impact on Ourimbah’s Bangalow Creek, and on flooding all the way to Chittaway Bay.

Brothers, Mr Chris and Mr Paul Taylor, have lived on a 35 acre farm off Enterprise Drive, Ourimbah, since their parents acquired it in 1985, but now they feel like the Kerrigans from the movie, The Castle. On September 6, they received a letter from Mr Brent Shanahan, Associate Director of Acquisitions from Transport for NSW, stating that they had 60 days to apply for compensation before two acres of their land was compulsorily acquired by the NSW Government. The Taylor brothers rely on a TfNSW tunnel under the main rail line for access to their property.

That will not be disturbed by the acquisition, and they’ve always accepted that it is poorly maintained and flood prone. Their concern is that the acquisition includes a “neck” of land bounded by Bangalow Creek and the rail line, that is their only access point to 11 acres of their property. They have been given a written promise of shared access, but they have some serious questions about how that will be achieved in practice. They also have grave concerns for the future of Bangalow Creek, where they’ve grown up watching platypus, catching yabbies and eels and observing all sorts of bird life.

Finally, the Taylor brothers, who said it was not unusual for their elevated farmhouse to be cut off by flood waters for three to four days at a time, believe that the engineering required to make the area suitable for the train maintenance facility, could exacerbate future flooding in Kangy Angy and Ourimbah, but also through to Tuggerah and Chittaway Bay.

Mr Chris Taylor said most of his land, 80 per cent, was flood-prone, apart from the house and the higher ground on the opposite side of the creek that Transport for NSW intends to forcibly acquire. “Two years ago, I received a letterbox notice from Transport for NSW saying that they wanted to acquire a small amount of my land,” Mr Taylor said.

A representative from Transport for NSW came to visit the property, some surveyor pegs were placed to indicate which land was to be acquired, and the brothers were told that, if they didn’t cooperate, the State Government “would just take it”. Before a valuation of the land could take place, TfNSW informed the Taylors that they needed more land than they had previously thought, and that was when the brothers started to get worried. The land that TfNSW needs is shaped like a piece of pie and would be the point where the trains depart the main line to be diverted into the maintenance facility, and that includes the slender thoroughfare the brothers rely on to move cattle, horses and to get machinery from one part of their property to another 11 acres.

“We have been told we will be given shared access, but we have not been given any details about how that will happen and we are worried it will make 11 acres of our land unusable and even inaccessible,” Mr Paul Taylor said. He said the new boundary between the TfNSW land and his property was less than 10 metres away from the banks of Bangalow Creek. TfNSW intends to fi ll the land, once they acquire it, to make it level with the existing railway line. That will result in fi ll between five metres and 10 metres high. The government has not explained how the “edge” or “face” of its filled land will integrate with the environmentally sensitive Bangalow Creek, or where the Taylor’s new shared access point will be, at the top or the bottom of the fi ll. They know that there will be a security fence between their land and TfNSW’s site, but they don’t know if it will be at the top of the fill or on the edge of the creek.

“It will be like a cliff; we will be standing on our property looking at the face of a concreted cliff and I don’t see how they are going to put that amount of fi ll in without damaging the creek,” he said. “They are going to be impacting natural water flows around the whole region in a major way, but they haven’t done any water studies,” he said. “I feel sick about what they are going to bulldoze,” he said. Brother Chris said that the valuations provided by TfNSW were an “insult” and based on recent sales of properties that were in no way comparative to their farm.

“Our concerns are about the impact the facility will have on the future value of our land, but we have more pressing concerns about our safety in future floods. “A wall of between five and 10 metres will redirect flood waters towards our house, which is the only part of our property that has never flooded and how will we get out? “We have been watching this creek since 1985, so we know how quickly it rises and where the water goes, we can predict when we will be flooded in, but this industrial facility will change everything. “It is taking away our way of life and we believe that everyone from Ourimbah, Kangy Angy all the way through to Chittaway, needs to be concerned,” Mr Paul Taylor said.

Mr Chris Taylor’s partner, Katrena, is wheelchair bound after a stroke and is also very stressed about what the future will hold. The brothers said they welcomed the decision by the new Central Coast Council Mayor, Clr Jane Smith, to examine whether there were any ways available to halt the NSW Government’s decision to go ahead with the rail maintenance facility. In a Central Coast Newspapers Video News interview, Clr Smith said she questioned the decisions of the former Wyong Council and the Administrator, to sell flood prone land known to include Ecologically Endangered Communities at Kangy Angy to TfNSW when they had examined other more viable sites.

Clr Smith said she was unsure as to whether the facility could be stopped, but was at least willing to propose that Council had a closer look at it. The Taylor brothers said Clr Smith would be welcome to visit their farm to examine, first hand, the potential impact on the creek and fl ooding in the broader area. The Taylor’s farm is currently zoned E2 Environmental Conservation and E3 Environmental Management, so they are perplexed as to why TfNSW would select their neighbourhood when fl at, flood-free industrial land was available further up the line with none of the access, acquisition, environmental or flooding issues facing the land at Kangy Angy. The Taylors believe they are the last of the local residents “to fall” and may be the only thing standing between the local community and the industrial might of TfNSW.

Mayor Jane Smith said Council had acted quickly and would progress community concerns relating to the location of the facility directly with the State Government.

Council has called for an urgent meeting with Transport NSW, within the next fortnight, on its plans for a rail maintenance facility at Kangy Angy.

Angry Kangy Angy residents say “I told you so”