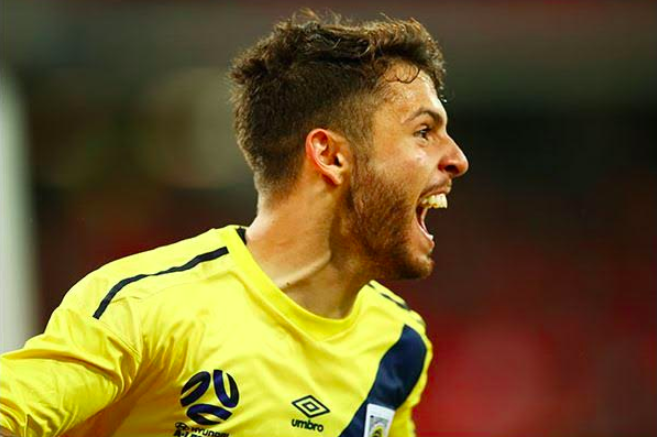 The Central Coast Mariners played out a 2-2 draw against Western Sydney Wanderers in the second
round of the A-League at Spotless Stadium on Saturday, October 14.
The Mariners needed to bounce back after their humiliating 5-1 defeat to Newcastle in Round 1, and with
the additions of Strom Roux, and Andrew Hoole, the Mariners were hoping to get their first win of the
2017/2018 season.
The Mariners held the lead twice but were unable to hold on to their lead, allowing Western Sydney to
equalise both times.
It was the Mariners who got off to the perfect start, after some nice build up play resulted in the first goal
scored by Central Coast striker, Asdrubal.
Asdrubal converted a poacher’s goal, after he was the first to react from a goalkeeping error by Western
Sydney, and poked the ball into the back of the net.
Western Sydney were then awarded a contentious penalty later in the first half, after Wout Brama
appeared to foul a Western Sydney player in the box.
The Mariners young goalkeeper on loan from English Premer League powerhouse, Tottenham Hotspur,
was hoping to keep out the second successive penalty he had faced in two weeks, and was only a
fingertip away from making the save.
Unfortunately, the penalty was converted by Western Sydney to even the match at 1-1.
The Mariners went into the halftime break as the better of the two teams, dominating the possession
statistics, and were unlucky not to be leading after a golden opportunity in front of goal by Connor Pain
was hit directly to the goalkeeper.
The Mariners started the second half firing and looking to achieve their first win of the season.
A brilliant run from Andrew Hoole allowed him to find space in the midfield, and dribble the ball into
space, before threading a through ball to Daniel De Silva, who dinked the ball over the Western Sydney
goalkeeper, to give the Mariners a 2-1 lead.
Unfortunately, Western Sydney were able to bounce back and scored from a cross, that resulted in a
goalkeeping error from Tom Glover, who gifted the ball to Western Sydney Player, Roly Bonevacia, who
equalised.
After Andrew Hoole received a red card later on in the match, the Mariners showed excellent composure
to take a point away from home.
“I think it’s a game we should have won,” Mariners’ Coach, Mr Paul Okon said.
“There’s a little bit of disappointment in the end but I am really proud of the players and their response
after last week,” he said.
“The work they put in during the week was tremendous.
“We’re off the mark now, we’ve got a point.
“We have a tough away trip next against Perth but we’ll go there and look to bring back three points,”
Okon said.
The Mariners will play Perth Glory in Perth in A-League Round 3, followed by a “Pink Round” match at
home against Melbourne Victory, on October 29 at 7:00pm.
Source:
Match notes, Oct 14
Western Sydney Wanderer’s vs Central Coast Mariners
Press conference, Oct 14
Paul Okon, Central Coast Mariners
Satria Dyer-Darmawan, journalist