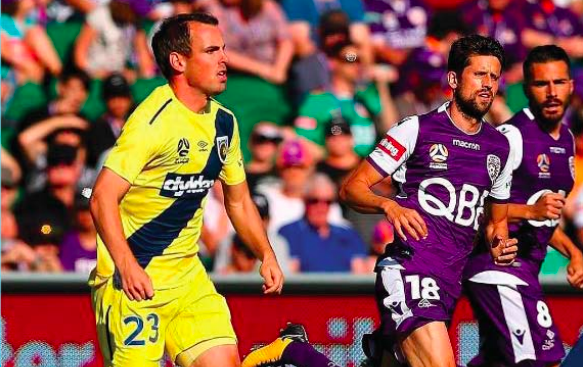 Man of the Match Wout Brama dribbling against Perth Glory

The Central Coast Mariners took an early lead in their away match against Perth Glory, but fell to the WA club after Perth’s Adam Taggart found the back of the net in the 85th minute.

In a hectic start to the match, the Mariners were extremely unlucky not to have the lead after just 40 seconds. Appiah found himself through on goal, and used his pace to burn the Glory defence, before placing the ball to the feet of Asdrubal, who was off balance and slipped at the crucial moment. Five minutes later, the same combination created the second clear cut opportunity for the Mariners, when Appiah broke on the left to again find Asdrubal.

This time, the Spanish striker controlled the ball and fi red a shot from inside the box that deflected for a corner. The Mariners were all over Perth in the first 15 minutes, showing signs of some exciting football. The Mariners’ pressure finally got a result, as some nice build up play from Danny De Silva gifted the ball to Connor Pain on the wing, who cut the ball back to Wout Brama, hitting it first time under the bar, giving the Mariners a 1-0 lead. After some missed opportunities from both teams in the first half, the Mariners went into halftime with a 1-0 lead. The second half started in the same fashion as the first half, with the Mariners imposing themselves on the game early. Momentum then shifted slightly towards the home side as the Glory created chances of their own, before Taggart looped a great cross onto the head of Keogh, that the Irishman nodded home to lock the scores at 1-1.

The Mariners were unable to bounce back from this, and unfortunately, were dealt a signifi cant blow 5 minutes before full time. Taggart turned from creator to match-winner, finding himself on the end of a long ball over the Mariners’ back four. In space, Taggart composed himself and converted his one-onone opportunity, that Tom Glover got a hand to, only to deflect it into the top corner. In the final 10 minutes, the Mariners continued to pressure the Glory back four, but couldn’t find an equaliser to take home a deserved point. “We’re very disappointed,” Okon said. “We can’t think that if we continue to give goals away like that, that we’re going to win football games.

“I thought our effort was outstanding, everything we spoke about and worked on during the week came to life in the first 20 minutes, and they’re the moments you need to punish teams, and we didn’t do that. “At the end, we had about five or six cramping. “We had some delays getting in to Perth yesterday, the heat was tough, but we won’t use any of that as an excuse, because I feel like the game could have been over in the first half. “Our approach is no different if we play at home or away, and I think everyone saw that today, Okon said. The Mariners will be hoping to claim their first 3 points of the season when they play Melbourne Victory at Central Coast Stadium next Sunday, for their annual Pink Round.