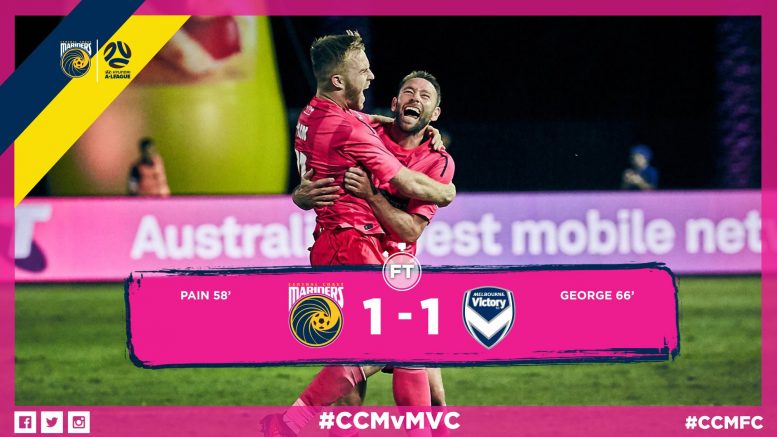 The Central Coast Mariners were unlucky not to come out of their home match against Melbourne
Victory with three points when the sides met at Central Coast Stadium on Sunday, October 29.

It was a game of two halves and both teams walked away with a point, just enough to keep Central
Coast off the bottom of the table, still one point ahead of Brisbane Roar.
The Central Coast Mariners were lucky to make it to half time without conceding but redeemed
themselves in the second half with stylish attacking football, excellent individual performances from key
players and several missed opportunities to take the win.

The first half was relatively lackluster with the visitors having more shots on goal and Victory’s imported
striker, Leroy George, taking full advantage of the absence of esteemed Melbourne Victory attacker,
Besart Berisha who was serving a two-game ban, to show the Central Coast crowd what he was made of.
The stand-out player for the Mariners in the first half was Andrew Hoole but at times he looked
completely isolated and without help whenever he attempted to make attacking plays for the home
side.
The Mariners enjoyed the majority of possession in the first half but did not take advantage and looked
outplayed at times as the clever-footed George and Victory’s other stalwarts, particularly Troisi and
Broxham made it a tricky affair for the young Mariners at times, particularly in the first 45 minutes.
The Mariners versus Victory match was the traditional Central Coast Mariners Pink round, dedicated to
raising money for women’s cancer support services on the Coast.
After 96 minutes of end to end football, the Melbourne Victory managed to hold on to their undefeated,
13-game run against the Mariners, but only just.
The post-match consensus was that the Mariners deserved the three points.
The only individual who begged to differ was Kevin Mucat who told the media post-match he was too
focused on his own team to offer any words of wisdom to the hosts.
The home side went into the match 9 th on the table trailed only by the Brisbane Roar and managed to
hold on to that posistion.
Mariners’ Coach Paul Okon said there were some draws that felt like a loss and some that felt like a win
but his team was still lacking in key moments.
Stand out performances were Connor Pain’s goal and Apiah’s off-the- bench performance that should
have resulted in a goal.
Golec’s footwork in defence was, at times, stunning.
The Victory’s free kick was soft and arguably not deserved but garnered the Victory the point they
needed to prevent the Mariners from a well deserved three points in front of their core supporters.

Note to Mr Mielecamp and the A-League: the locals really appreciated the 7pm kick off in the cool with
a wonderful atmosphere. It may very well win you a few more bums on seats if you keep it up.