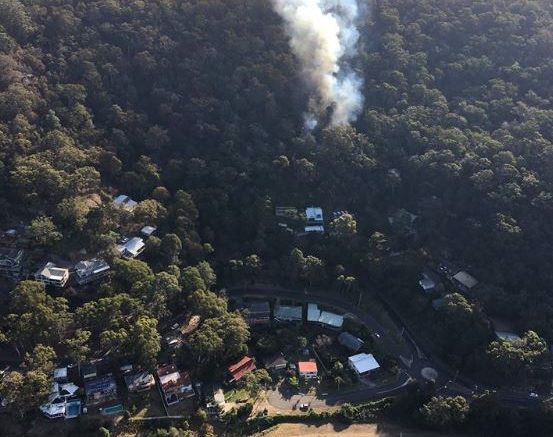 A view of the Koolewong fire

Firefighters attached to NSWRFS, FRNSW and NPWS battled a blaze at Koolewong in the afternoon of October 2.
The fire, which was listed as out of control by the NSW Rural Fire Service Central Coast District, was burning along Glenrock Pde.
The blaze burned up Koolewong Ridge in difficult terrain.
There was no immediate threat to properties, but the difficult terrain coupled with dry conditions made for a tough fight for firefighters, who managed to contain the blaze just after 7pm, almost two hours after arriving on the scene.
It was a busy week for firefighters on the Coast who also had to deal with blazes at Palm Grove and Somersby.
The Palm Grove blaze, believed to be a residential backburning operation gone awry, resulted in the death of a man and the hospitalisation of two others, after the deceased lost control of the blaze.