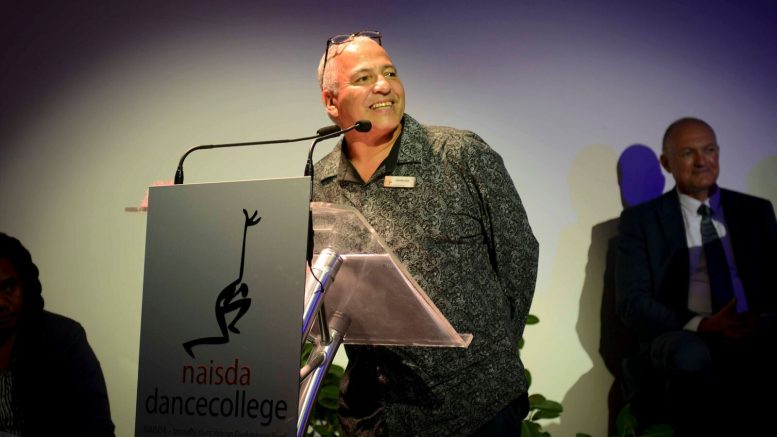 Chief Executive Officer of NAISDA Dance College, Mr Kim Walker, received the Award for Services to Dance Education at the prestigious Australian Dance Awards held at the Arts Centre, Melbourne, on September 24.
The annual Australian Dance Awards recognise and honour Australian dance artists and professionals who have made an outstanding contribution to Australian dance.
Mr Walker received the Award for his extensive work in dance education and the significant impact this has had across many generations of young performers and artists; both through his current position as Chief Executive Officer at NAISDA, as well as during his previous role as director of the Flying Fruit Fly Circus.
The award also recognised his innovative leadership in preparing the next generation of Aboriginal and Torres Strait Islander artists for careers in the performing arts.
Mr Walker, who has been Chief Executive Officer of NAISDA for nine years, said that he was thrilled to receive such an honour.
“To be recognised in an industry full of inspirational and dedicated dance educators is truly humbling,” said Mr Walker.
Whilst at the NAISDA helm, Mr Walker has helped solidify its presence as one of Australia’s most innovative arts training organisations.
As a member of ARTS8, the Australian Government’s Roundtable for Arts Training Excellence, NAISDA is recognised as one of just eight of the country’s elite arts training bodies.
“NAISDA is leading the way in providing outstanding training and support to Aboriginal and Torres Strait Islander performing artists from across the country,” he added.
“This Award certainly honours all NAISDA students and graduates who continue to make such significant contributions to our nation’s cultural, artistic, economic and education landscape.
“They constantly amaze, inspire and motivate us.
“They are our true measurement of success.
“Looking ahead we aspire to make NAISDA accessible to even more young people by building an International Cultural Learning Centre for Indigenous Creative Study called Naya Wa Yugali at our campus on the NSW Central Coast,” Mr Walker concluded.
2017 has been a stellar year for Mr Walker and the team at NAISDA, with the College also a NSW finalist in the Telstra Business Awards for the charity division.

One of Australia’s earliest churches to celebrate its 175th anniversary