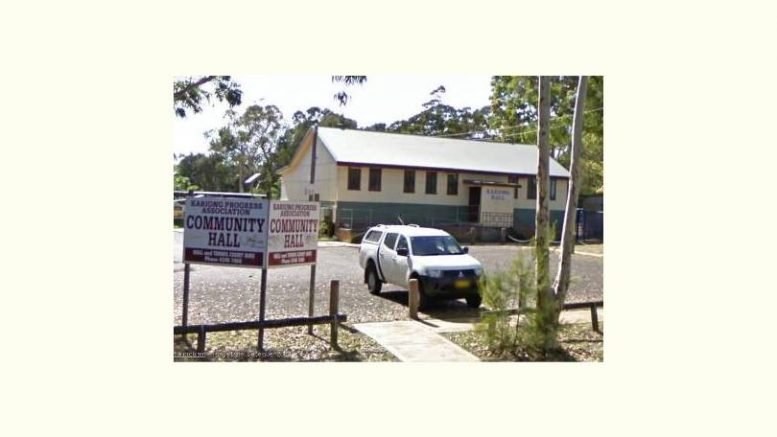 The Kariong Community Hall has been locked for a year

The Kariong community has been locked out of its hall for the past 12 months and Central Coast Council has failed to give an adequate explanation.
“The hall has been locked since the Kariong Progress Association did not sign the lease they were offered by Council,” said Vice President of the Kariong Eco Garden, Ms Lisa Wriley.
“The agreement went from a five-page to a 31-page document that was simply asking too much of the volunteers who had run the hall for the past 60 years,” Ms Wriley said.
“Kariong Eco Garden had been a regular user of the hall for our seasonal events, trivia night, as a wet weather backup and for small activities like making our re-usable boomerang bags,” she said.
“We had to move everything out of our storage cupboard in the hall, including sewing machines and ironing boards, and hand in our keys.
“The community was told that there would be an expression of interest process by Gosford Council and then the amalgamation happened.”
By May, the Eco Garden committee contacted Council because they were worried about planning for their annual trivia night, usually held in the hall in August.
“We were told that the new organisation was so close to reaching agreement, that our event would have caused too much confusion in the handover and we couldn’t have the hall,” she said.
“We didn’t even know who to ask within Council, so we were given the name of Mr Peter Stokes, and within a day of sending him a very simplified email, we had permission to use the hall for two events only, the trivia night and a boomerang bag workshop,” she said.
“We had to sign our lives away, but fortunately, Council didn’t charge us.
“Now the hall sits absolutely empty and sad with cobwebs.
“The Kariong Neighbourhood Centre would be the best people to take over the management of the hall, but they are still waiting for Council to tell them how to express interest, and meanwhile, other organisations are seeking to run the hall.
One well-known elderly Kariong couple, who did not wish to be named, had been principally responsible for caring for the hall and managing bookings for at least the past 40 years, if not longer.
They efficiently managed all bookings and were responsible for the hall’s upkeep and maintenance, along with that of the community tennis courts.
The hall was well used by community groups during the week for dance classes, exercise classes and meetings by groups such as the partners of Vietnam Veterans and the Brisbane Water Caravan Club.
The hall was run in a manner that aimed to keep the costs of rental reasonable but still have enough money to keep it well maintained.

The Kariong Progress Association was formed when there were only about 12 houses in the neighbourhood and a rural fire brigade was formed at the same time.
Committee members held raffles and card nights to save up to pay for the construction of the hall, which was virtually built by volunteers.
The hall is on Crown Land and the original custodians have now all passed away, so it is managed as Crown Land by the Council.
When the Progress Association was handed a new licence agreement in 2015 for the hall and the nearby tennis courts, its legal advice was that the terms were too onerous for its aging volunteers to continue to care for the facilities.
The new agreement required the committee to take responsibility for things in addition to the care of the hall, such as mowing the adjoining playground, lopping trees and cleaning the public toilets.
The worst thing was that Council would take 50 per cent of any earnings from the hall, which would have forced the Progress Association to put its fees up in order to cover costs.
The Progress Association believed that it had a good track record of running the facilities but was forced to walk away and hand its keys to Council.
The hall has been empty since.
It is understood that management of the community tennis courts has now been given to the International Tennis School, but it is unclear whether the community has access.
The Progress Association spent $21,000 resurfacing the courts in 2015.
Coast Community News asked the newly-elected Councillors to comment.
Deputy Mayor, Clr Chris Holstein, said a number of concerns had been raised with him during the election campaign about community halls and leasing.
“I have sought a briefing from staff in relation to these concerns, Kariong and others,” Clr Holstein said.
Clr Greg Best said: “The dismantling of our community by the former Administrator must be reversed.
“The good folk of Kariong deserve answers as do, indeed, the broader community,” Clr Best said.
“In my view what has happened at Kariong is just the tip of the iceberg, as hard nose economic rationalism has run rampant over the past 12 months or so,” he said.
“I for one, will demand answers and bring this Council back to basics.”
Clr Chris Burke said the matter was operational and would not comment.
Clr Kyle MacGregor, said he believed Council needed to review the lease/licence agreements put in place with all the community groups that may find themselves in the same boat at the Kariong Progress Association.
“Council fees and charges were an ongoing issue raised by residents throughout the election campaign and I see no harm in reviewing existing policies and seeing if they are both equitable and economically viable for local residents,” Clr MacGregor said.
“I am a firm believer in the principle of self-management, be that of a local hall, sporting club or business,” he said.
“It is my preference that local people who are engaged and contributing essential services to our community through engaging in these organisations should have their service respected, acknowledged and that they should be empowered to make decisions about their relevant organisations and services that would be a benefit to the local community.
“Council has a role to play in supporting these organisations and ensuring that the relevant regulatory framework is beneficial for them and the services that they provide for our community.
“I believe it would be best to examine any relevant potential actions or activities that could be undertaken by the Council in order to service bodies like this that provide essential work for our local communities.
“It is in line with community expectation that these facilities are supported and promoted by their local Council not shut down or expunged from servicing a community that they have served for decades.
“The people of the Central Coast deserve a service-driven Council that is focused on supporting and promoting bodies like this, not one beholden to the neo-Liberal ideology of gouging and service cuts that is in stark contrast to the kind of council that residents not only want, but deserve.
“Although there is some merit in a macro regional framework in its essence, I believe our community would be best served by these ‘micro’ organisations under the principle of self-management.
“Many of these organisations have been in place for decades or more and have contributed much to our local community and they would be right across the relevant issues for their local community.
“I am also opposed to these bodies and local services being run for profit by contractors or external agents, and I believe that essential services such as neighbourhood, community or child care centres should be in public ownership and staffed by and controlled by members of our local community as a first preference.”