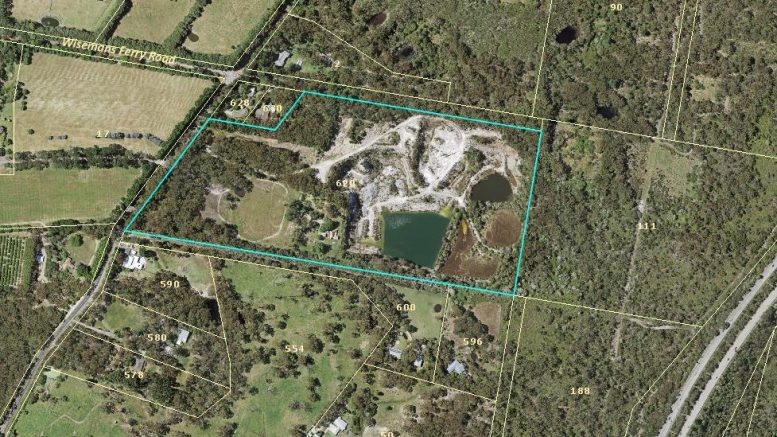 Aerial photo with the quarry site edged in blue

The Joint Regional Planning Panel (JRPP) has refused a Section 96 application to import 330,000 tonnes of fill to a quarry site off Wisemans Ferry Road, Somersby, almost 12 months after it was lodged with Central Coast Council.

The application was to allow the importation of Excavated Natural Material (ENM) for use in the construction of noise bunds.
The noise bunds were required as a condition of a court-issued consent for a quarry operation at 620 Wisemans Ferry Rd.
The Land and Environment Court determination of the original DA (42409/2012) allowed for 2-3 million tonnes of sand extraction from the site.
The conditions required noise bunds to be constructed along the property’s boundaries.
Ms Lynn Cowie, a Somersby resident who spoke against the proposal, said if the modification to allow the importation of 330,000 tonnes of ENM had been approved, it would have resulted in 10,313 truckloads of fill, or in excess of 20,000 truck movements in four weeks.
Central Coast Council had recommended refusal of the amendment in its assessment report to the JRPP and had raised concerns about whether the amended development would significantly increase the environmental impacts of the total development.
Even though Council recommended refusal, the Environmental Protection Authority (EPA) gave general terms of approval for the quarry’s Environmental Protection Licence to be amended in relation to the Section 96 application.
The applicants, Mr Laurence Steteri of Down to Earth Geotechnical and Environmental, Lawson Quarries and Mr Mark Haugh, had argued that the Section 96 was necessary to comply with conditions of the existing development consent that required the building of bund walls within a four-week period.
However, according to its determination and statement of reasons, the JRPP concluded unanimously that the proposed number of truck movements did not necessarily relate to the construction of the full length of surrounding bund walls.
“The applicant had failed to quantify baseline data of the soil to be used from within the site for the bund walls and what change, if any, was proposed as a result of the change in the type of imported material,” the determination said.
“The modification proposal originally involved movement of the southern bund wall to the north to avoid removal of trees.
“Conceptually this had merit.
“However, this aspect of the proposal did not contain the requisite details and was withdrawn.
“At the Panel meeting, the applicant advised of an openness and desire to continue with this aspect.
“However this would require additional technical details, reports, plans, re-exhibition and Council analysis, none of which was reasonably imminent nor certain.

“The key fact of what quantum of soil was and is to be used from the site was not able to be quantified by the applicant during the assessment, while even at the meeting, a range of differing figures were verbally provided to the Panel by the applicant.
“Any changes to the quantity of soil to be sourced from within the site and imported to the site for the purpose of constructing the bund walls must be assessed in terms of any associated environmental impacts, including but not limited to, potential changes in the number of truck movements and any associated impacts on the local and broader traffic network, acoustic impacts and air quality impacts.”
In summary, the JRPP determination said the proposed modification had been refused because of “the lack of detail regarding the change, if any, of material to be used from within the site and that to be imported for the perimeter bund walls [and] the associated traffic movements.”
The determination was made on September 14 when the JRPP met at Erina to consider the matter.
Six individuals made verbal submissions against the proposal at the public meeting.
Central Coast Council had received 128 submissions during the first round notification public exhibition and a further 64 during a second round notification period.
“The two quarry owners were totally unprepared, and had not given Central Coast Council any reports that were requested, so the owners were told by the JRPP that Council could not wait any longer for the reports so the application was refused,” Ms Cowie said.
“The impact of 20,600 truck movements along Wisemans Ferry Rd, and on the residents and the community, seemed to be lost on the owners, who thought it was their right to do this,” she said.
“The JRPP enlightened them on how it all works, and they cannot do anything without stringent impact reports such as noise and dust reports, a comprehensive construction traffic management plan and a quarry management plan, and all these were due to council before the JRPP meeting and before they could even think of starting the noise bunds.
“The two owners wholeheartedly denied they landfilled quarries, yet it is all over one of the quarry owner’s website that they have a large number of licenced DA sites and were currently taking in fill and are able to cart and dispose of VENM, ENM, general solid material and hazardous material.”
The owners can appeal the JRPP decision in the Land and Environment Court.