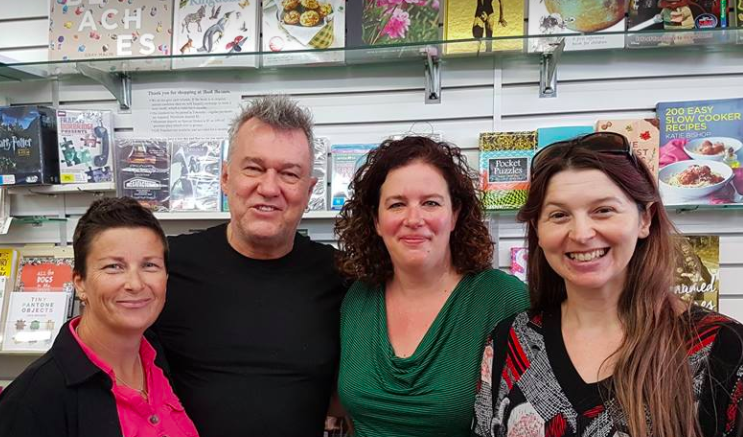 Singer-songwriter Jimmy Barnes has been invited to Umina for a book-signing for a second time.

When he visited a West St bookshop to sign his book Working Class Boy in October last year, fans queued around the block for hours for the chance to meet him and collect a signed copy of the book. With the launch of the second part of his autobiography Working Class Man, the similar numbers are expected for the signing at 2pm on October 26. Owner of Umina Beach Book Bazaar, Ms Mandy Beaton McIntosh, who has organised the signing, said it would be best to be early to avoid missing out.

She said Barnes’ autobiography was a tale of a life too big and a story too extraordinary for just one book. She said he had lived many lives: from Glaswegian migrant child to iconic front man, from solo superstar to proud father of his own musical clan. “Barnes picks up the story of his life as he leaves Adelaide in the back of an old truck with a then unknown band called Cold Chisel.” The bookshop will also host another signing by an awardwinning children’s author on Saturday, October 21. Mr George Ivanoff, who has written more than 100 books for children and teenagers, will hold a book signing and author talk from 10:30am until 11:30am.

Mr Ivanoff has written school readers, library reference books, chapter books, novelettes, novels and a short story collection and has books on both the Victorian Premier’s and the NSW Premier’s Reading Challenge booklists. His teen science fi ction novel, Gamers’ Quest, won a Chronos Award for speculative fi ction. The sequel, Gamers’ Challenge, was shortlisted for the same award and the fi nal book in the Gamers trilogy, Gamers’ Rebellion, also won a Chronos Award. Mr Ivanoff’s current series of books is the interactive You Choose series. You Choose: The Treasure of Dead Man’s Cove won the 2015 YABBA in the “Fiction for Younger Readers” category; and You Choose: Alien Invasion From Beyond the Stars got an Honour Award in the KOALAs in 2016.