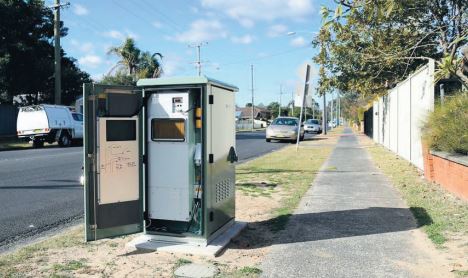 NBN Fibre to the Node cabinet on a roadside verge.

A report released by the Parliament’s Joint Standing Committee on the National Broadband Network has delivered a damning verdict on the Turnbull Government’s NBN network, with the Central Coast front-and-centre according to NSW Senator, Ms Deborah O’Neill.
“The report identified a crisis of confidence occurring in the NBN due to systemic faults, failed connections, and reliability and chronic speed issues,” Sen O’Neill said.
“Despite billions being spent, many customers feel their service has gone backwards under the NBN with regional areas being particularly impacted,” she added.
The report follows more than eight months of public hearings and submissions to the Parliamentary Joint Standing Committee on the NBN.
Mr Laurie O’Brien, who owns a financial planning business on the Coast, estimated his losses to be around $50,000, but expressed his frustration that the forms to be completed for compensation only act as a deterrent.
“I made an application to Telstra for a loss of income, which I estimated at about $50,000.
“The forms to be completed and queries raised prompted me to conclude that I will never get compensation because of the ridiculous data that I would have had to extract.
“Just to fill out the evidence of a loss of income would take me several weeks away from my core business.
“The forms are so convoluted.
“I think they are trickery.
“I think they are designed to make you give up,” Mr O’Brien said.
Mr Ken Knight from Macmasters Beach, had a similar experience and detailed his own NBN horror story at the local hearing in August, including long calls to Telstra and significant financial losses.
Mr Knight endured 28 hours of phone conversations with his retail service provider and an estimated loss of $60,000 worth of potential business due to his failed NBN connection.
When Mr Knight asked for compensation, Telstra offered him $50.
In another instance, Mr Neil Keele from Terrigal, submitted evidence to the committee retelling months of ongoing issues with his connection.
Currently, Mr Keele is only receiving 40-70 Kb/s download speeds despite being locked into a 24 month contract for 100MBps with his internet service provider.
The Committee identified 23 recommendations to help improve customer service, technology choices and transparency including: the government direct and enable NBN to complete as much as possible of the remaining fixed line network using FTTC at a minimum (or FTTP), and require NBN to produce a costed plan and timetable under which that would be achieved; the urgent need for new consumer and supplier rights which provide protections, wholesale service-levels and remedies for service failures; the introduction of a new business grade product specifically geared towards small business; an overhaul of the Telecommunications Industry Ombudsman to give it more power and ability to resolve consumer disputes; and, the government should ensure that digital inclusion is measured and reported.
“The government must address the ongoing failures in the NBN.
“Australia can’t afford to keep spending billions on an NBN that is not delivering,” Sen O’Neill said.