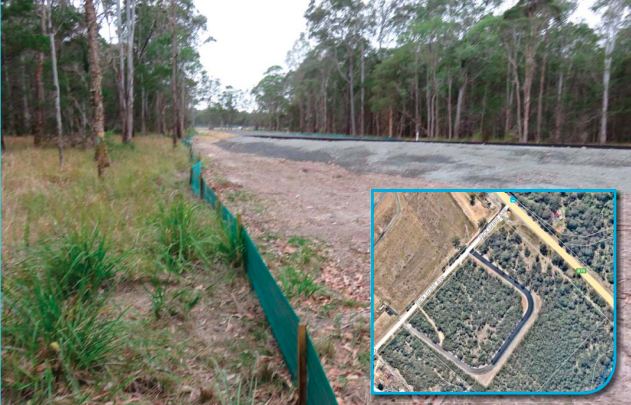 The land was cleared and the road built before the DA was submitted (inset, an aerial view of the road)

Council CEO, Mr Brian Bell, has been asked to explain why land, at 140 Sparks Rd, Warnervale, was cleared in May for installation of a road, when the Council knew it contained the threatened Melaleauca Biconvexa and formed part of a fauna corridor. Having cleared the environmentally-sensitive land in May, Council then lodged a development application with itself on August 24 for a $100,000 project to clear the land (DA1055/2017).

Recent aerial photographs show that the land now has a sealed road on it, at least half of which has been built through an E2 zone, where Melaleauca Biconvexa grew prior to the clearing. According to Council’s own LEP land use tool, roads in E2 must have consent, which is also the case for fl ood mitigation, one of the reasons cited by Council for clearing the land. However, no decisions have been recorded against the development application confirming that the work has been completed without consent. A search of the Wyong Local Environmental Plan (LEP 2013) to determine whether Council did, in fact, need permission to clear the land, uncovered clause 7.10 within Part 7, which relates to additional local provisions.

The clause was not in the original LEP, which commenced in 2013, so it was inserted as an amendment by Wyong Council after that date. It gives Council permission to carry out a development without consent on any land, other than land in a heritage conservation area, land containing a heritage item, or land that is in an environmentally sensitive area, for exempt and complying development, and up to $5 million. It is understood that Central Coast Council may have relied on this provision to complete the works at 140 Sparks Rd without a development consent. Lake Macquarie, Gosford and Hornsby LEPs do not include a comparable clause and, in fact, have clauses devoted to the protection of environmentally sensitive land.

Wyong Regional Chronicle has asked interim CEO, Mr Brian Bell, and the newlyelected Councillors to comment on whether the provision will be included in any unifi ed LEP for the new Council, as it appears to give Council wider powers than those afforded to most other local governments, to develop land without consent. Mr Laurie Eyes, board member of the Community Environment Network, said he had already written to Council’s new Interim CEO, Mr Brian Bell, objecting to DA1055/2017 and to Council’s clearing of threatened species native vegetation without consent.

“There is abundant already cleared land opposite Warnervale Airport in Mountain Rd, zoned for industrial use, therefore, there is no justification for clearing threatened species habitat in the wetlands of 140 Sparks Rd.” According to Mr Eyes a wildlife corridor sweeps through the site, further demonstrating the inadvisability of developing the area that now has a sealed road on it. In July 2016, Council resolved to undertake a Biodiversity Certification Project which included the 140 Sparks Rd property, despite much of the land having already been studied as part of a 2007 WEZ Biocertification. According to the Statement of Environmental Effects (SEE) submitted by Council in support of its proposed, but in fact completed, clearing at 140 Sparks Rd, the proposed development would “serve as preparation of the site for future development in line with zone objectives and planned expansion of airport facilities”. Mr Eyes said:

“There is no plan or Master Plan for the development of Warnervale (Central Coast) Airport. “Therefore it cannot be claimed that the clearing of the site is for future development in line with zone objectives and planned expansion of airport facilities. “The destruction of threatened species habitat and threatened species is not in the public interest.” “The clearing for the road within 140 Sparks Rd without consent was bad enough, however there were no silt fences installed while the work was being undertaken.”