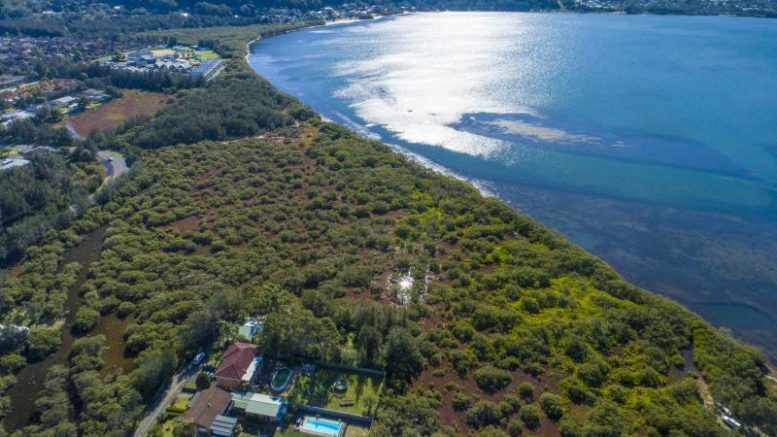 Another view of the wetlands to be sold Photo: One Agency

Mr Pat Aiken, from Coastal Residents NSW, said the imminent sale of the 48 acres of environmentally sensitive wetland at Davistown, was an opportunity for the Central Coast Council and NSW Government to work together to put the land in public hands for perpetuity.
“The impression I came away with from a community meeting to discuss the sale, was that the owner wants to sell that property, and as far as I know, this is the first time that all of those parcels of land have come up at the same time,” Mr Aiken said.
“The issues here go right back to the time when the area was first settled, and there are all the issues of the development of the past, the filling of the land, our lack of knowledge of what we were doing to it, and our ignorance of the previous owners of the land,” he said.
“There is an opportunity here for us to do something about it, and it was really annoying to me to hear Central Coast Mayor, Clr Jane Smith, say that it was not an option to put it into COSS [Coastal Open Spaces System].”
According to Mr Aiken, the NSW Government’s yet-to-be proclaimed Coastal Management Act 2016, and its Wetlands State Environmental Protection Plan (SEPP), mean that the current NSW Government “are the proponents and developers of some of the world’s best coastal management legislation (Then Minister for Planning, Mr Rob Stokes’ words in Parliament), which clearly indicates the intention of government to protect wetlands.
“So here’s a great opportunity that hasn’t come up before,” Mr Aiken said.
Member for Terrigal, Mr Adam Crouch, in an interview with ABC Radio Central Coast, said that he did not believe it was the responsibility of the NSW Government to intervene in the auction of the Davistown land.
Mr Crouch said the land was not zoned for development and that there had been scare mongering about the consequences of its sale.
“If he is saying it can’t be developed, is he guaranteeing that it will never be developed, because that is not what is indicated by the vendor and it is certainly not indicated by the zoning of the land,” Mr Aiken said.
He said part of the land is already zoned residential, so certain types of development are permissible with consent.
“If they proclaim the Coastal Management Act, which is apparently in limbo, then the SEPP outlines the development constraints that would apply to that land and he cannot pre-empt a decision by the Land and Environment Court (LEC) any more than anyone else can.
“There is a risk that if there is enough money thrown at it, that it could be developed.
“Is Mr Crouch prepared to say now that he guarantees that there will be no development on that land?”
Mr Aiken said the focus of the community meeting appeared to be to put a committee together to fight any future development, but he believed that there was a need for immediate community action.
“Clr Smith said she would take it to the Council officers and she was sure that they would help, but she made it very clear that the idea of putting it into COSS was going to be too difficult and not an option, and I don’t understand that.
“In the COSS strategy, there is a section in it for the Davistown wetlands.”
According to Mr Aiken, a former COSS committee within Gosford Council did make a decision to remove some land from COSS because it didn’t meet the criteria for the system.
“We are talking about 10 years ago, and things change, so let the community decide on whether it is something that could be a part of COSS.”
Mr Aiken said money had been set aside by Gosford Council for protection of the Davistown wetlands.
“An acquisition account and a reserve account were established to assist in covering the cost of purchasing wetland parcels in Davistown.
“Where has that money gone?” he asked.
“I don’t think it would take much for Mr Altavilla to withdraw the land from open sale if he believed that there was the possibility of some serious negotiations.
“The site was identified as the fifth highest priority site for acquisition in the Council’s Wetland Management Study 1990.
“But this is more about the State Government having a role to provide the funding.
“This should not be seen as the community having to pay for it, but for the Council, together with the State Government, putting together the purchase,” he said.
Coast Community News has asked for a response from Mr Crouch and Clr Smith.
Source:
Interview, Oct 13
Pat Aiken, Coastal Residents Inc