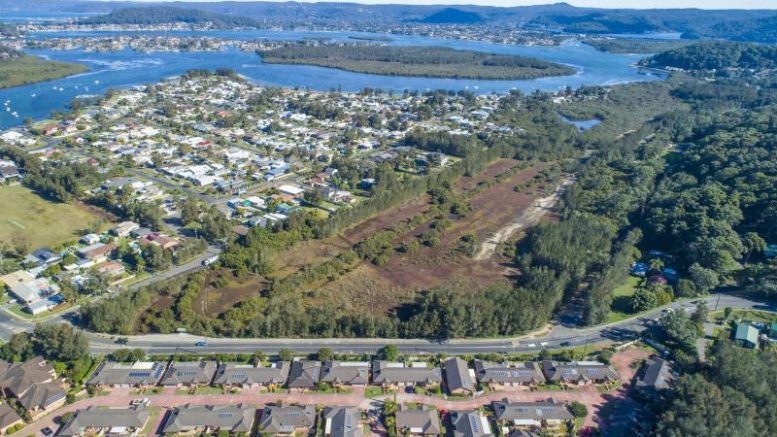 Another aerial view of the wetlands Photo: One Agency

Local Aboriginal Elder, Mr Phil Pulbrook, has been a resident of Davistown for the past 53 years, and he is worried that an unscrupulous, unsympathetic developer will buy the 48 acres of land described as Tidal Shoals.
The land will be auctioned in Sydney on October 24, and was the subject of a community meeting at Davistown on October 11.
The community meeting was called to explore ways to prevent the sale of the land resulting in it falling into the hands of an unsympathetic developer.
Mr Pulbrook said the Davistown area was well-populated prior to white settlement because of the abundance of shell fish and the fresh and saltwater food sources, including the bulbs on the mudflats and saltwater foods such as kelp.
“In the swamp, where the brackish water is, we eat the bulbs of the reeds because they taste like onion,” Mr Pulbrook said.
He said handed-down knowledge indicated that there are ancient, culturally significant, fish traps on the mudflats at Davistown.
“On king tides at Christmas time, the fish would come in on the mud flats.
“Back then, there weren’t so many mangrove trees, it was more saltmarsh and they were kept fresh, and when the tide receded, the fish were in the traps that were dug into the mud.”
According to Mr Pulbrook there would not have been rocks in the area.
“Ninety nine per cent of the rocks came here as ballast on boats,” he said.
“This is culturally-sensitive land.
“The shellfish are still there, the same shellfish there now that were there thousands of years ago, that provided sustenance for a subsistence society.
“I collect stuff like Warrigal Greens, Pig Face, Teatree and Paperbark that we have uses for.
“The black ducks are my main totem, and there are only five pure ones left that I look after.
“The Cuckoo birds that nest in the mangroves come all the way from New Guinea and they are classed as a prawn bird to us, they tell you when the prawns are around.
“Red Bellies (snakes) live in the swamp.
“We used to own the oldest house in Magnolia Ave, and behind it, there was a holding pond for freshwater turtles, eels and bull mullet.”
Mr Pulbrook said he believed any future development of the land to be auctioned would have consequences far broader than damaging the local ecology and cultural remnants present.
“More filling of blocks at Davistown will affect flood levels, and will mean changes for recreational and professional fishermen, and could even lead to more silting of the Ettalong Channel,” he said.
“Development would create more sediment and cost more for dredging, whereas they could buy the land and it would be there in perpetuity.
“In the future, there could be a class action by all the people in Davistown against Council because their failure to buy this land could cause more serious flooding if it is developed.”
Mr Pulbrook’s list of the habitat provided by the land to be sold is extensive.
He lists the Stone Curlew and Bell Frog as two endangered species reliant on the wetlands for habitat, along with Eastern Ospreys, Pied Oyster Catchers, Powerful Owls and the Regent Honeyeater.
Mr Pulbrook said correspondence and reports from the former Gosford Council made it clear that there were three wetland areas considered to be Bell Frog habitat, which the former Council referred to as the Magnolia, Ilumba and Romford wetland areas.
A Gosford Council plan of management for Green and Golden Bell Frogs said: “These wetlands also contain important vegetation and ecosystem types that have been mapped and included in SEPP 14 wetlands (these include areas of saltmarsh, swamp oak forest and freshwater swamps).”
Other reason that the land is not suitable for development, was a possibility that the site included a high potential of acid sulphate in the soil, 100 year flood extent, the fact that it includes Ecologically Endangered Community E47a estuarine saltmarsh, grassland and E40i Estuarine Swamp Oak forest, regionally significant E47 estuarine mangrove scrub, and that it was a Sepp 71 Sensitive buffer and is bushfire prone.