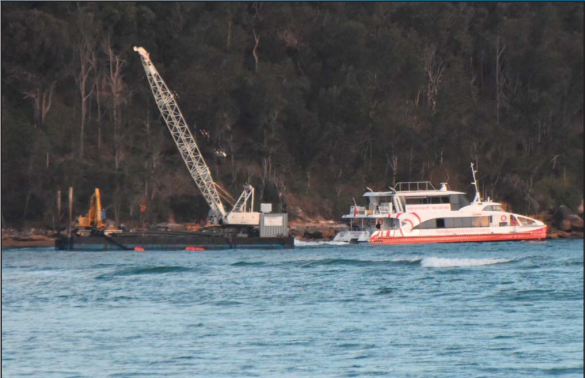 A Palm Beach ferry skipper “is being criminally investigated” for coming into contact with a sandbank in the Ettalong Channel, according to ferry operator Fantasea Cruising.

“On July 27, our vessel attempted to enter the channel on its way to Wagstaffe for the first collection of the day,” Fantasea Palm Beach acting chief Ms Wendy Harch has stated in a letter to local residents on September 13. “The vessel, while attempting to enter the channel, came into contact with the sand bank.” The service wax diverted to Patonga for the remainder of that day. “Fantasea Cruising Palm Beach is not prepared to expose its ferry skippers to criminal prosecution for an event that occurred because the channel is not being properly maintained,” Ms Harch said.

She said that during the 13 years Fantasea had been operating the ferry service between Palm Beach and Ettalong and Wagstaffe the channel area from Little Box Head to the Ettalong terminal had gradually been silting up. “This has resulted, on occasion, in ferries having to be diverted to Patonga when the ferry is unable to safely navigate the market channel,” she said. “Whilst we take every precaution to ensure that there is communication with the public when there is a need to change the ferry stops, we are very aware of the inconvenience and additional travel time that this causes to residents.

“Fantasea… is very committed to providing local residents with a safe and reliable ferry service. “However, it is the NSW Government’s obligation and duty to maintain the marked channel so that it is safe for vessels to navigate. “It is with the safety of our passengers in mind that the decision to divert the ferry is made. “We have also communicated with the NSW Government regarding the state of the channel on previous occasions and the channel has also been the subject of some local media attention. “We are aware that the NSW Government has undertaken some interim dredging on the channel this year however this issue has not been resolved. “Attempts to operate the ferry service are continually becoming frustrated by the additional sand in the channel,” she said. The letter from Ms Harch called on residents to contact their local MP and the media in support of urgent dredging of the channel.

She said the ferry operator had requested the NSW Government conduct further urgent dredging of the marked channel to ensure it was safe for the ferry to use. “We have advised that until the dredging takes place we will continue to divert the ferry stop to Patonga in all situations where it appears that the ferry may be unable to enter the channel,” Ms Harch said.