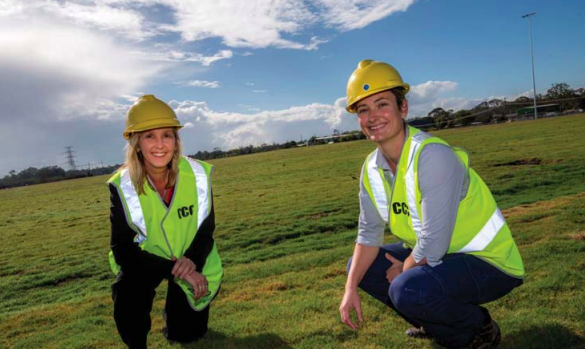 Central Coast Council’s vision to create a state-of-the-art sporting complex is closer to reality, with the laying of turf for the five of nine playing fields planned for the site.

Construction is on track for the $23.71m sporting complex, which will boast a premier ground plus 8 playing fields, cricket pitches, public amenities including change rooms, canteen facilitates, store rooms and parking. Council Manager Open Space and Recreation, Mr Brett Sherar, said the quality of the sporting experience is directly related to the quality of the playing surface, and Council was leaving no stone unturned in its pursuit of the perfect playing fi eld. “Spring is the perfect time of year to lay good turf, and this is the start of what will be a 12 month process to create the perfect playing fi eld,” Mr Sherar said.

“We want to attract significant sporting competitions from around Australia, and we can do that by establishing our reputation as having first class surfaces,” he added. Central Coast Mayor, Clr Jane Smith, said the Complex was the biggest infrastructure project to be delivered on the Coast in the 2017-18 financial year, and will deliver significant economic benefits to the region. “The economic benefits that will fl ow to the Central Coast from hosting major sporting tournaments are huge in tourism dollars and in creating local employment opportunities,” Clr Jane Smith said.

“We have already significantly increased our funding for tourism marketing, and having world-class facilities here on the Coast will further increase our visitor appeal. “Attracting sporting talent to the region to use this facility will be a great opportunity to inspire young people and the broader community to also get involved in local sport. “We need more visionary infrastructure like this on the Coast and we will continue to look to partner with the Federal Government to deliver it for our growing region. The Tuggerah Regional Sporting Complex has been jointly funded by the Australian Government investing $10 million through the National Stronger Regions Fund, and Council contributing $13.71 million, and is on track to be open by September 2018.