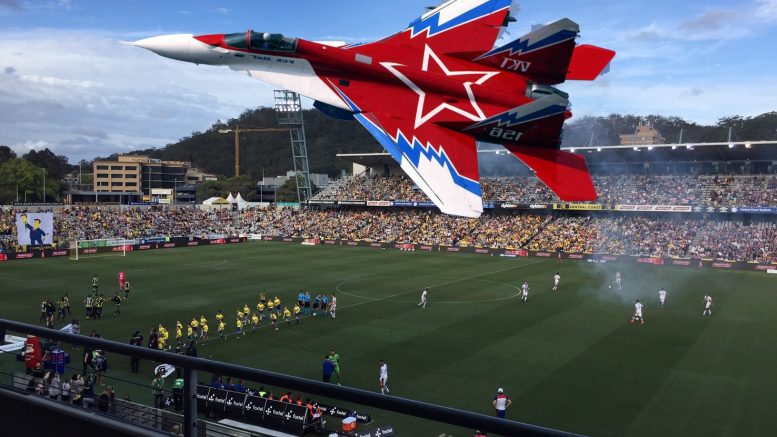 After a promising opening 15-20 minutes in the first A-League F3 derby for 2017-18 the Central Coast
Mariners came unstuck and the 1-5 win to the away side gave the Newcastle Jets well-deserved
bragging rights for the journey back up the freeway.

Mariners fans, at least 10,000 of them out of the 12,000-plus crowd, were ecstatic for the first 15 minutes
of the new-look Central Coast Mariners’ season opener at Central Coast Stadium on Saturday, October
8 but their dreams had turned to mush by half time thanks to new Jets’ recruit and former Mariners’
striker, Roy O’Donovan, scoring a hat trick.
The F3 (now M1) freeway between Gosford Stadium and Newcastle had been decorated with wooden
spoons painted in Newcastle Jets colours in the days leading up to the F3 Derby.
There was positive anticipation on the Coast that Paul Okon’s second season as coach, with a new-look
side and some impressive overseas signings, would garner improved results for the much-loved Central
Coast Mariners.
Mr Okon chose a 4-3-3 formation for the first game of the brand new A-League series.
Thomas Glover was in goals with Ben Kennedy on the bench.
The back four from left consisted of Joshua Rose (3), Antony Golec (5), captain Alan Baro (15) and Josh
McGing (4).
Golec and Baro were both expected to make a difference to the defensive line up with Baro showing his
skill levels in pre-match friendlies.
The home side’s three midfielders for the match were import Wout Brama (23), Daniel De Silva (10) and
Tom Hiariej (6).
Connor Pain made it to the first 11 as number 11 on the left wing, Asdrubal (9) expecting to make an
impact as the team’s new striker and Appiah out wide on the right.
Ernie Merrick’s formation mirrored the home side’s 4-3-3 but his back row proved to have more wisdom,
strength and staying-power than the home side’s, particularly Topor Stanley and another former Mariner,
Nigel Boogard.
Asdrubal was definitely targeted by the Newcastle defence, and in the opening moments of the match a
challenge on the new striker resulted in a free kick for Baro that needed to be swept away by the Jet’s
keeper.
The crowd was instantly behind the Mariners and they appeared to deliver a notable improvement in
terms of their speed and cohesive passing when compared with last year’s performances.
Appiah played his heart out from the opening minutes of the game until his substitution well into the
second half although his crosses from the wing were often not taken advantage of by the side’s new
attackers.
The statistics were certainly in favour of the home side for most of the match with a beautiful run from De
Silva that took in most of the field resulting in an early (second) corner for the Mariners.
And then it happened, within the first five minutes, Asdrubal scored, the cannon fired, and the home
crowd could not contain its joy.
Unfortunately the tide turned quickly when a very soft penalty was called against Baro and O’Donovan’s
delivery was clinical in spite of Keeper Tom Glover’s best efforts.
O’Donovan had made a point, the crowd’s noise levels fell and so too, unfortunately, did the heads and
shoulders of many in the Mariners’ squad.
The Mariners certainly did not give up during the remainder of the first half but the best efforts of Appiah
and others had no answers for the cool heads of the Jets’ defence, particularly Topor Stanley and
Boogard.
The Jets were on the ascendancy from around the 20th minute when shortly after Topor Stanley hit the
post after a fine delivery from Petratos.
Sloppy defending at the 28th minute resulted in the Jets’ O’Donovan scoring with a very easy shot on an
open goal.
The home crowd grew quieter, the sick feeling from last season returning to their stomachs, and perhaps
the players sensed the panic because their shape, their passing game, everything hopeful about the first
20 minutes appeared defeated.
A Georgievski cross resulted in another shot to O’Donovan that again took the keeper off his feet but the
goal was declared offside so the score remained 1-2.
At the 38th minute any nerves O’Donovan felt about taking to the Central Coast Stadium pitch in Jets’
colours had disappeared, his header earned the hat trick off a powerful cross from Nabbout and the
Mariners’ dreams for the new season were shaken if not shattered.
In his post-match interview, Jets’ coach Ernie Merrick said one of their key strategies was to get in
behind the home side’s defence and they started the second half doing just that.
Just as the Mariners had exhibited a greatly improved ability to get to the ball first and string attractive
passes together to retain possession in the early first half, the Jets took advantage of their rattled
opponents by doing exactly the same in the second.
They were also happy to sit back and let the home side do most of the work.
Mr Okon, in his post-match interview, said he could not fault the performance of any one of his players

and there were certainly moments of promise with Brama, De Silva and Rose putting passages of play
together but the Jets defence was too strong.
A good chance for the Mariners came at around minute 75 when Asdrubal drew a foul jyst outside the
box with a free Kick taken by Brama well within range but connecting directly with the Jets’ defensive
wall.
The Jets managed another goal at the 81st minute, this time assisted by O’Donovan and scored by
Champness and the Mariners could recover.
Another Mariners’ corner resulted in a shot on goal going straight into the arms of the Jets’ keeper.
In the dying minutes of the game, and there were about 15 of them, the Mariners’ could not muster the
cohesive attacking plays needed to answer the Jets’ rock-solid defence and then Petratos hammered
home the Jets’ fifth and final goal.
“Right now it is hard to see the positives,” said Mr Okon when he faced the media after the match.
“I don’t think we played badly but there were just certain key moments we didn’t handle,” he said.
He called O’Donovan’s third goal a killer and said he believed defensive errors and final passes both
needed improvement.
“They didn’t stop trying, the energy was good and the intensity was good but it is not good to concede
five goals,” he said.
“I don’t think we had a bad player out there, I don’t think we had a bad performer,” he said in a gesture of
taking responsibility for the disappointing opener.
Source:
Match notes, Oct 7
Central Coast Mariners v Newcastle Jets
Post match media conference notes, Oct 8
Paul Okon, Central Coast Mariners
Ernie Merrick, Newcastle Jets
Jackie Pearson, journalist

Central Coast will fall under the new Primary Production SEPP

Mariners fans hope for a memorable finish to a forgettable season