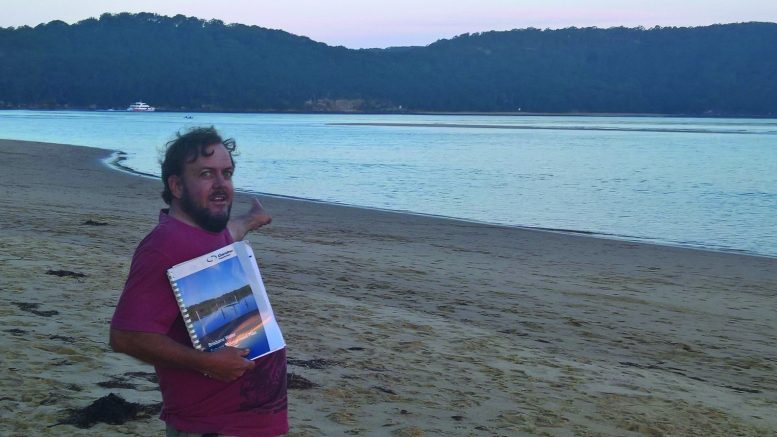 Mr Mark Ellis, President of the Central Coast branch of the Australian Conservation Foundation looking acorss the channel to the temporary dredge

The Central Coast branch on the Australian Conservation Foundation has called on both the Member for Gosford Ms Liesl Tesch and Central Coast Council to ensure an integrated plan for the management of the entrance to Brisbane Water is followed.
The branch claimed the current emergency dredging near Lobster Beach was another example of the ongoing poor management of the entrance to the estuary.
Branch president Mr Mark Ellis said: “We understand the importance of having a safe channel to navigate for the boating community and the commercial ferry operators but there is more at stake here.
“The Coastal Zone Management Plan that was approved by the NSW Environment Minister in 2016 does not mention dredging of the channel at Ettalong, Half-tide Rocks or adjacent to Lobster Beach,” he said.
“The troublesome section of the channel is, in fact, the North Broken Bay Channel off Lobster Beach which was ignored in the Coastal Zone Management Plan and is not within Brisbane Water which is defined as extending upstream from Half Tide Rocks.
“It is not Little Box Head which is deep enough and it is not the Ettalong-Half Tide Rocks section one kilometre upstream.
“Therefore it could be argued that the new Council is legally obliged to manage the Coastal Zone in accordance with the plan approved by the Minister and not abandon that plan to meet the interests of the boating community or a private ferry operator.”
According to Mr Ellis, the contentious issue of commercial operations benefiting from the public purse predates the proposed fast ferry proposal in 1998.
“The environmental impact statement provided for the fast ships proposal stated the outer channel was 1.3 metres in places during low tide conditions and the proposed ferry then was to have a hull draft of no more than 1.25 metres.
“So with this previous knowledge and the 2007 experience of a vessel grounding, why would a company increase the size of its vessels at a time when the estuary was becoming more difficult to navigate?” Mr Ellis said.
“Neither the previous Gosford Council, nor NSW Government, adequately addressed the environmental and financial concerns related to the ongoing management of the channel and estuary.
“This situation seems to be ongoing with the Central Coast Council’s operational plan for 2017-18 approved at Council’s meeting on June 28, providing only $2.8 million for waterways and coastal protection.
“The Central Coast Council has two major estuaries to manage since amalgamation, and both require detailed assessment of commercial operations as the catchments are increasingly developed and utilised for the range of aquatic activities.
“The $2.8 million will not go far under the region’s two Coastal Zone Management Plans and the environmental management of the dredging at Lobster Beach will be neglected.
“As was highlight by previous Gosford councillors, the funding for the remedial and ongoing management of this area is a huge concern as no part of this estuary is a designated port, so the funding streams and statutory controls do not apply as they do to ports such as Newcastle or Port Kembla.
“And no money has been allocated for dredging (other than at Patonga) under the plan which has other spending priorities and tasks,” Mr Ellis said.
“We now have a well-known environmental educator as mayor and the ACF branch would expect Cr Smith to guide her fellow councillors to make decisions based on a triple bottom line of good governance which includes environmental management of the estuary and surrounding beaches,” he said.
“Many local residents who have a long-term understanding of the estuary have made it clear to us that, along with increased storm surges, they consider previous dredging to have significantly contributed to the now serious erosion at Lobster Beach to the north-east of the channel and to the beachfront from Ettalong to the southern end of Ocean Beach.
“They are concerned ongoing dredging may cause further erosion if it is not part of an integrated Coastal Zone Management strategy.
“We call on the Member for Gosford, Ms Liesl Tesch and Central Coast Council to stand up and fix this problem together in the greater interest of the community,” Mr Ellis said.