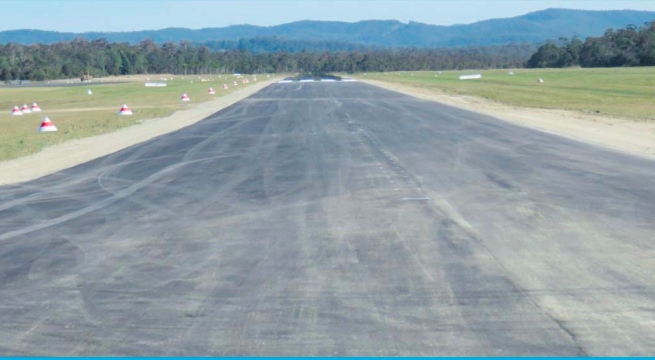 Wyong Council was fined for altering the runway

All works at Central Coast Airport could cease until November 27, pending the delivery of a briefing on the proposed Wyong Economic Development Zone (WEZ) to Council by CEO, Mr Brian Bell, prior to that date.

In a Mayoral Minute presented to the October 23 ordinary meeting of Council, Central Coast Mayor, Clr Jane Smith, attempted to use the Government Information (Public Access) Act 2009, to bring previously confidential information about the WEZ and Central Coast Airport into the public domain. The former Wyong Council had been criticised by community groups and by the Shadow Minister for the Central Coast, Mr David Harris, for keeping too much information confidential. Clr Smith formally moved that Council requested Mr Bell to complete each of five directives.

The first was to make an authorised proactive release of information relating to the future development of the WEZ, including the Warnervale/ Central Coast Airport, under section 7 of the GIPA Act, with such information to be made available on the Council website. Mr Bell was also required to provide a report to Council in respect to any documents that he determined should not be disclosed, and to give reasons for coming to that decision. The Mayoral Minute also asked him to provide a report to the ordinary meeting of the Council, on November 27, on the draft Masterplan for Central Coast Airport. Clr Smith’s minute further asked for provision on a briefi ng, before November 27, on the strategic development of WEZ. She called for the suspension of all works on the Central Coast Airport until November 27, “except where those works were required by law or the suspension of those works would put Council in breach of existing contractual obligations and/or expose Council to claims for damages or variation under any contract.” The Mayoral Minute stated that in 1996, following community concerns about the development of Warnervale Airport (as it was then named), the NSW Parliament passed the Warnervale Airport (Restrictions) Act 1996 (WAR Act) to restrict certain activities and development at the Warnervale Airport.

“Subsequently, the airport land was included in the WEZ for industrial development,” the minute said. “The site is at the upper catchment of Porters Creek Wetland, the largest freshwater wetland on the Central Coast. “Much of Porters Creek Wetland is identified as a SEPP14 wetland with the north east areas (including much of the location of WEZ) described as a “Wetland Management Area” in Chapter 3.10 of Wyong Shire Development Control Plan 2013. “In early 2015, Wyong Council started planning for a Regional Airport at Warnervale, despite the site being subject to the WAR Act. “In May, 2015, the former Wyong Council applied to the then NSW Minister for Planning to have the WAR Act repealed. “That Minister initiated a review of the WAR Act. “In August, 201,7 the current Minister for Planning refused that request. “On October 28, 2015, the former Wyong Council resolved to proceed with the Warnervale Airport development and adopted a masterplan. “That 2015 masterplan has never been out on public exhibition.

“This Council has continued to spend funds to clear native vegetation and build assets such as roads, runways, buildings, a fl ood levee, fencing and security cameras in and around the Airport. “In addition, an Airport Manager was employed and expressions of interest called to develop the airport. “There are also substantial other expenses such as planning, advertising, staff time and legal and planning consultants. “Key Planning documents do not provide for an airport including: Central Coast Regional Plan 2016 prepared by the NSW Government, excluded an airport of any description. “Given that the proposed regional airport is not included in key planning documents and the State government’s recent decision to retain the WAR Act, it is appropriate for Council to reconsider the future direction of this site in consultation with the community,” Clr Smith’s Mayoral Minute said.

The next edition of the Wyong Regional Chronicle will report on the outcome of the October 23 Central Coast Council, which was to consider the Minute. Long-term anti-regional airport campaigner, Mr Laurie Eyes from Wyong Creek, has written to all Councillors regarding the Mayoral Minute. “The ratepayers of the Central Coast have contributed over $33 million to Warnervale and Kiar airports,” Mr Eyes said. “This $33 million is now not available for roads, footpaths or any other pressing community need,” he said. “Since 2013, when the Eaton-led Wyong Council put a 2600 metre airport in the 2013 LEP, Wyong Council allowed no proper opportunity for community input into any airport proposals or actions. “While Council ignored community objections to their LEP airport, the NSW Liberal Government did not. “The airport was removed from the 2013 LEP, following community submissions and consultation with a local Liberal MP, the Planning Department heads and Parliamentary Secretary. “The next opportunity for the community to have a say on Council’s airport was during the community consultation process for the Central Coast Regional Plan.

“Over 30 per cent of all submissions from the entire Central Coast were objecting to Council’s airport. “Despite strenuous objections from Wyong Shire Council (WSC), and Council’s sustained pressure on the NSW State Government and Planning NSW, the airport was removed from the regional plan. “The most recent opportunity for the community to have a say in the future of Warnervale Airport came in April 2016, after former Mayor, Mr Doug Eaton, requested that the Minister for Planning repeal the Warnervale Airport (Restrictions) Act 1996. “The Minister set in place an independent assessment process to determine the future of the Act. “The independent assessor met with Council, Aeroclub and community stakeholders, inviting written submissions. “In August, 2017, Planning Minister Roberts announced that the Act would be retained, vindicating the stand taken by the community and f nishing any plans Council had for their 1800 metre jet airport approved by Council on October 28, 2015.

“The retention of the Act also formalised the imposition of a curfew from 10:00pm to 6:30am, a limit on movements of 88 per day and penalties of $11,000 per infringement of the Act. “Presumably the ratepayers would be liable for these penalties, as the ratepayers own the airport. “Council has refused me numerous GIPA applications in relation to the airport, resulting in three hearings at the Administrative Tribunal, where I represented myself against Council’s Barrister and Lawyer. “I have won two of the three hearings. “At a hearing this year, I won a copy of Council’s confidential Warnervale Airport Development Opportunities Feasibility Study 2013. “Despite the ruling of the Senior Member, Council would not give me a copy of the document, arguing copyright, an argument they used in the Tribunal, only to lose it. “Council has only allowed me note taking of the study. “I believe Councillors should be given a copy of the Feasibility Study and that it should be released into the public domain as awarded by the Administrative Tribunal,” Mr Eyes said.