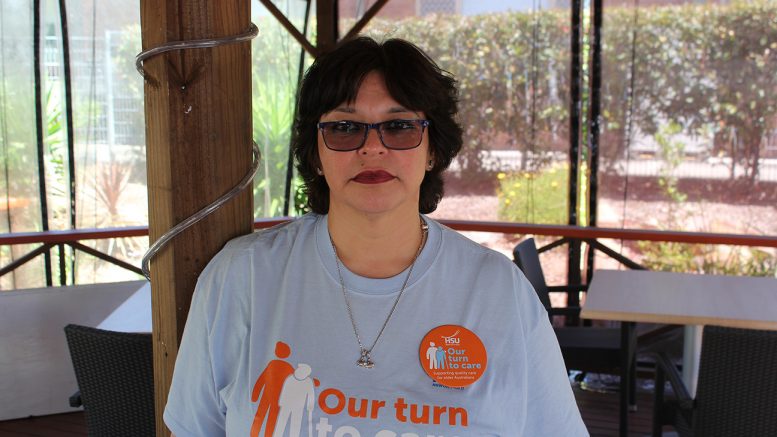 Local aged care workers have launched a new campaign highlighting the effect that budget cuts are having on their industry.
The launch took place at the Royal Freemasons’ Benevolent Institution (RFBI), Lake Haven Village, with the cooperation of RFBI management, who were supportive of the campaign.
A new report from the Health Services Union called: Aged Care, An Industry in Crisis, surveyed 300 aged care workers across NSW, seeking their response to more than $3 billion worth of federal budget cuts since 2013, and the impact on jobs.
In 2016, cuts to aged care took a further $1.2 billion from the sector, leaving the average aged care facility worse off by more than half a million dollars per year.
The effect on staff is clear.
Almost six-in-ten respondents (58 per cent) said that, due to budget cuts, they are not able to provide the level of care that residents deserve.
Of that group, 80 per cent nominated staff shortages as the main barrier to providing effective care.
However, other constraints on spending were revealed by survey responses.
One survey response said: “We were told that a pad has to be a certain wetness before a new one can be put on.
“This is terrible,” the response said.
“We’ve been told to turn lights out throughout the facility.
“Cost cutting is ongoing.
“There are not enough staff to properly give care to those in need.
“Staff are tired before starting their shift…because they are burnt out from being required to work beyond human capacity every day.
“The ratios of staff to residents are dreadful.
“You’ve normally got two staff to 35 people, including those with chronic needs and palliative care.
“You’re pushed with work, you can’t fulfil all your duties in the 7.5 hours.
“It’s not fair on the workers or the residents.
“The funding cuts have made it impossible to provide the quality of care that our residents deserve.
“The cuts have caused massive staffing cuts, supply cuts, and a focus on money instead of resident care.
“Meals have gotten smaller, we are continually running out of linens, washers, pads, and kylies.
“We even run out of night bags.
“The cuts have caused the downgrade in the gloves that we are provided to wear, when we are not running out of those as well.
“When there weren’t enough staff, the residents had to be fed cold meals because we couldn’t feed them all fast enough.
“You had to watch residents being abused by staff and know that even if it was reported, nothing would be done, because they couldn’t do without the staff member.
“People had to be lying in wet beds for hours on end because there weren’t enough staff to change them”.
Local aged care Personal Care Assistant, Ms Marta Ordenes, who spoke at the Lake Haven launch, collaborated many of the survey responses from her own work experiences.
“I believe we need better pay and the residents need better care,” Ms Ordenes said.
“We have no time to do the little things like taking residents to the toilet when they ask to go, they often have to wait,” she said.
“I had an experience the other night where a resident was calling for me but I was caring for another patient, so it was half an hour before I reached her, and all she wanted was a glass of water.
“It is not fair that she had to wait so long for something so simple.”
Ms Ortenes said she had been working in the aged care industry since 1984 and she said conditions were getting worse in recent years for both residents and staff in residential aged care.
“As the population ages, there are more residents, and they need more assistance, but the staff numbers stay the same.
“We have showering to do of a morning before breakfast, and then after breakfast, we have to sit the residents who have already been showered in a lounge area because we have more to shower and dress and medicate.
“There is no time to talk to the residents or care for them with dignity, and unfortunately, this is very common everywhere,” she said.
Ms Ortenes commutes to work in Sydney and is paid $20 per hour, even though she has 33 years’ experience.
Wyong Regional Chronicle used the Federal Freedom of Information law to access statistics on reports made to the Commonwealth Department of Health regarding suspicions or allegations under the Aged Care Act of reportable assaults in aged care facilities.
For all Central Coast postcodes, there were 46 serious physical results in 2015-16 and 54 in 2016-17.
The number of reportable sexual assaults in aged care facilities on the Coast was 14 in 2015-16 and 7 in 2016-17 so the total reportable assaults for 2015-16 was 60 and for 2016-17 it was 61.