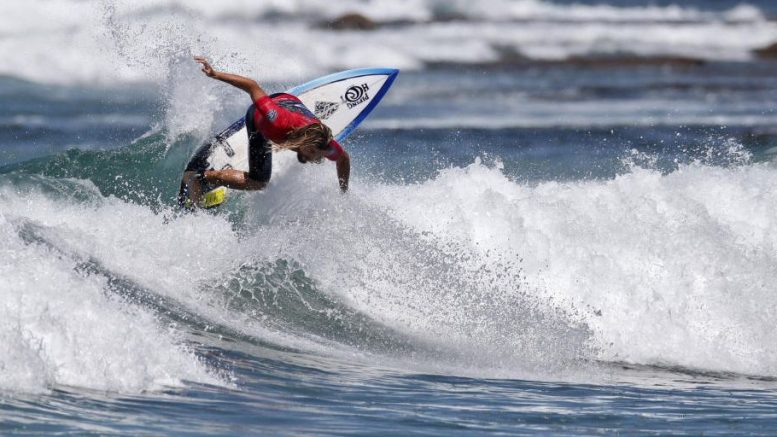 It has been a landmark twelve months for surfers of the Central Coast Academy of Sport Crowne Plaza Surfing Program, with many great achievements at local, state, national and international level.
Most recently, 2013/14 CCAS Female Athlete of the Year, Macy Callaghan, capped off a great year by making her debut in the World Surf League at Trestles earlier in September, after winning the Junior World Title in January.
When combined with Molly Picklum winning the Under 16 Girls’ NSW title in Port Macquarie in July, and Joel Vaughan’s Under 14 Boys’ Australian title win last December, CCAS Surfers have enjoyed a wealth of success over the 2016/17 season.
The 2017/18 CCAS Surfing Program is shaping up to be better than ever, with new program inclusions such as expert advice from coaches, Marcus Davidson, and Sandra English, breath mind body control work with Luke Sullivan from Teams Challenge Australia, insights into board design and shaping with RMS Surfboards, surf-specific strength and conditioning sessions, and input from Surfing NSW and Surfing Australia as they build the high-performance pathway leading into surfing’s debut entry at the 2020 Tokyo Olympics.
Ms English said of the recent developments in high-performance surfing: “It’s awesome that surfing is in the next Olympics in 2020 and it’s something we’ve been waiting for, for a long time.
“Australia is positioned to do well as long as they get selections right, but surfing is a hard sport and very subjective to conditions on the day, so it won’t be easy,” she continued.
“I’ve been surfing for over 40 years and it’s incredible to see how far the sport has come and what the young athletes are able to do today.
“We’ve seen such great development in our academy surfers, who get so much out of the program, and I’m excited for another season working with surfers of different levels,” Ms English said.
CCAS Programs and Communications Coordinator, Mr Mark Tipple, said of the 2017/18 Surfing program: “The Program is shaping up to be the best one yet, with the additions and changes we’ve made to the schedule, and I’m excited to see the development of the 2017/18 CCAS surfing squad.
“With a new partnership formed between the NSW Institute of Sport and Surfing Australia in August, NSW Surfers and those from the Central Coast in particular, have a fantastic opportunity to be on the podium at the Tokyo 2020 Olympics.
“The Central Coast is a traditional stronghold for surfing in NSW and the results of past and present academy surfers, and with results like Avoca Boardriders’ Club winning the Australian Championships earlier this year, local surfers are in a perfect position for the high-performance push of this next generation,” Mr Tipple concluded.

Lincoln Hey has a string of top results in cycling