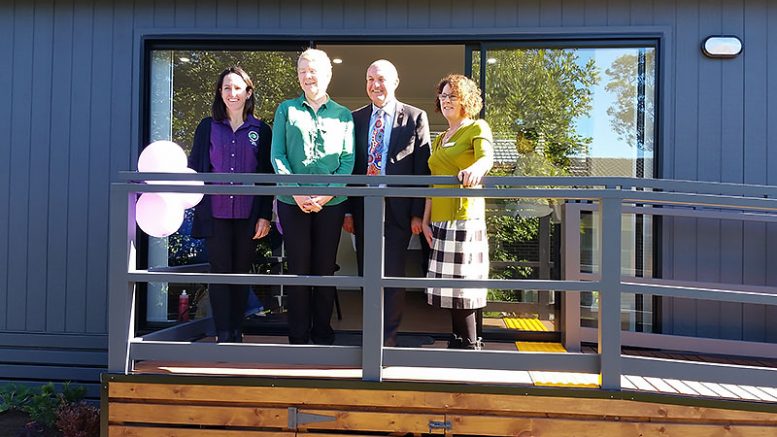 The new northern building at Wyong has been opened.

The Central Coast Community Women’s Health Centre at Wyong has been able to increase its range of services during 2017, thanks to a brand new building for group activities.
Ms Paula Jarman, coordinator of the Wyong centre, said the facility now has purpose-built space to run its groups on domestic violence, anxiety and self-esteem.
She said the new building was a great new asset for service delivery, given the former Wyong Shire’s position as having one of the highest rates of domestic violence in NSW.
“It is such a vulnerable area and I think that is why our service is so important and so needed, because the women, when they want to leave, come here,” Ms Jarman said.
“They don’t always have the skills or courage to leave a violent situation and when they come and see one of our counsellors, or they go through one of our groups, they become empowered and able to move on,” she said.
“Our community is becoming more diverse culturally, so women have families who live overseas and they don’t have local family members, resources or language to deal with things here.
“The good thing is that women are resilient, and once they have that support, they do find the strength to stand on their own two feet and move on.”
The Wyoming centre is on a site owned by Central Coast Council, where it has been located since 1993.
Ms Jarman said the Member for Wyong, Mr David Harris, assisted the organisation to apply for the funding to pay for the community building.
“David Harris supported our application with the 2015 Community Building Partnership and we received $100,000.
“We commissioned Built Smart and they built a group room that they craned in over the back fence.
“The kids in the preschool next door called it a flying building.
“We can run our groups so much more effectively because we’ve got a screen, air conditioner, and a much more vibrant space.
Other activities being run in the new room include yoga, a ‘mums and bubs’ group, a menopause group and pilates.
Groups cost $5 and counselling costs $10.
“It is only a donation, so we have never turned anyone away if they couldn’t afford it.”
Ms Jarman said the centre is now seeking to increase the community’s awareness of the new facility and the services available.
“From the outside, you just see a little cottage and you don’t know what happens inside, but we have really high quality trauma informed staff that know how to work with women in crisis.
“It is a safe place for women and it is women only.
“Our services are strength based, very much about walking with that woman through her journey and about giving her the skills, understanding and more information about her situation so she can make informed choices.”
In spite of the new group room, the Wyong centre only has enough funding to provide Monday morning childcare and then centre only opens 2.5 days per week.
Ms Jarman also said that the centre was part of the East Wyong area that has been identified as requiring redevelopment.
“In addition to the women’s health centre, the area has a preschool, tennis courts, and the beautiful Bakers Park field, and we are all at risk of losing these resources if we are not careful.