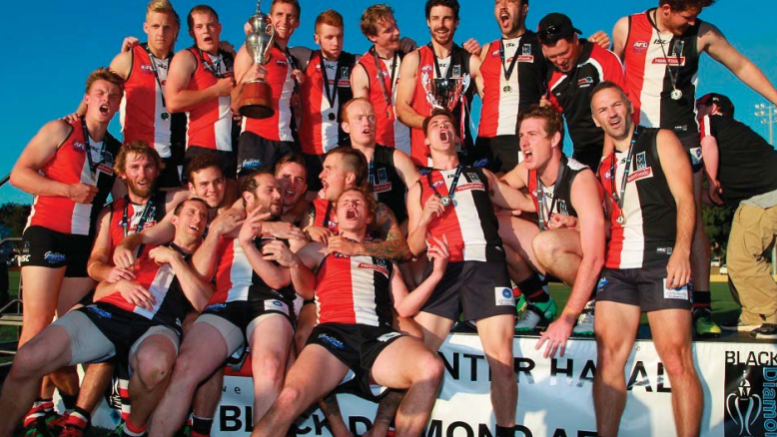 T he 2017 Black Diamond Cup Grand Final has been described as the best Grand Final of this generation.

The match saw minor premiers, Terrigal Avoca, hold off a fast-finishing Cardiff Hawks, to win the Black Diamond Cup by a mere nine points, 89 to 80, on Saturday, September 2 at Newcastle No.1 Sportsground. In front of a record crowd on a glorious spring day, the Panthers won the game in the second and third quarters, where they kicked nine goals to four, to set up their victory over a gallant Cardiff in a thrilling and pulsating Grand Final.

The Hawks led at quarter time after Elliott Davey Medallist, Tom Yensch, scored a goal from the 50m arc after the siren. However, led by McBain Medallist, James Webster, the Panthers slipped away from Cardiff to lead by 26 points at the mid break. Cardiff, aided by a moderate Nor-Easter, kicked the only three goals of the last quarter, however, Terrigal threw players back, including veteran, Alastair Richardson, and held on in a thrilling fi nish. Cardiff coach, Nathan Harkness, made some interesting tactical moves in the second half that almost brought victory to the Hawks. Regular centreman, Marcus DeLeur, who copped a knock to his shin late in the second quarter, moved to ruck duties for most of the second half, winning his fair share of taps and giving Cardiff more options in the clearances.

Yensch, who suffered cramping in the second quarter, played at full-forward in the last quarter, kicking two goals and nearly stealing victory for his club. Terrigal Avoca’s experience and desperation eventually saw them home. Former coach, Chris Bishop, won many clearances and proved a beast at winning contested balls. Sam Ellis was effective in the ruck and up forward, whilst rover, Jack Grimmond, continued his recent run of excellent form, often working at the bottom of stoppages.