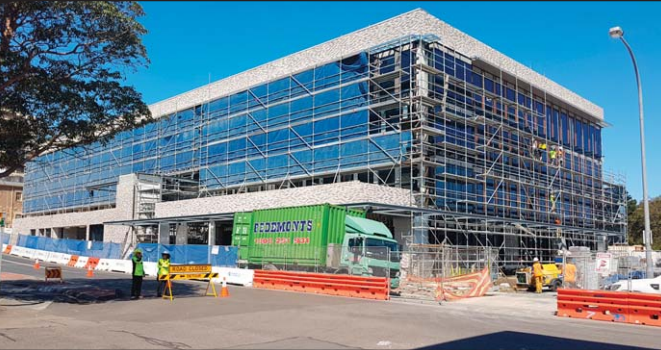 Doma has placed the ATO building on the corner of Mann St and Georgiana Terrace, Gosford, on the market

The Doma Group has appointed Colliers International to sell the brand new office building being constructed to accommodate the Australian Taxation Office at 99 Georgiana Terrace and 38 Mann Street in Gosford.

President of the Gosford Waterfront Alliance (GWA), Mr Kevin Armstrong, said the quick turnaround on the sale of the building was evidence that Doma’s fi rst priority was to earn a “quick quid” from its sale. Labor’s Senator Deborah O’Neill agreed. According to the Colliers International announcement, the building comprises a 7,150 square metre offi ce building to be completed in late 2017 and a two-storey heritage building which will be renovated for retail, café or boutique offi ce use. The Commonwealth Government has committed to a 10-year lease on 99 Georgiana Tce, with two further options of 5 years, representing 97 percent of the asset’s total income. “Offered by one of Canberra’s largest investment and development companies, Doma Group, this property is an incredible opportunity in the Central Coast’s commercial hub,” said Paul Powderly, State Chief Executive, ACT at Colliers International.

“At a total net lettable area of 7,380 square metres, the offering includes a landmark offi ce asset that delivers a secure income stream, with a Triple-A tenant in the Commonwealth Government and a fi xed 3.5 per cent review mechanism to ensure rental growth over the term of the lease.” “The population of the NSW Central Coast is expected to grow by 70,000 to around 409,000 over the next two decades, which will require over 30,000 new jobs to be created over the next 16 years. “Gosford is perfectly primed to benefi t from its proximity to Sydney, growing population and beautiful surrounds,” said Mr Adam Leacy, Director, Commercial Sales and Leasing at Colliers International.

“The property is bounded by Georgiana Tce and Mann St, only minutes from the CBD and adjacent to Gosford City Park, meaning it is the ideal location for offi ce space in this booming part of the NSW economy. “The new offi ce is also complemented by the adjacent 38 Mann St which is the former School of Arts which has a strong social and historic signifi cance for the area as the site of the fi rst showing of motion pictures on the Central Coast.” The properties are being sold via an Expressions of Interest campaign, closing October 5. GWA’s Mr Kevin Armstrong said the community had not forgotten that Doma acquired “public land” when it purchased a portion of the former Gosford Public School site.

“The sale of that public land created the opportunity for an out-of-town developer to make a quick quid at the expense of what could have been a public facility on the waterfront,” Mr Armstrong said. “What a shame that the covert State Government sale of the school site has deprived our community of the longterm benefi ts of an active, enlivened waterfront, including a performing arts centre,” he said. Senator Deborah O’Neill said: The decision by Doma Group to sell the Australian Tax Office on the Gosford Waterfront shows that the true intention of the Liberal’s decision to sell the site was to make money and run. “All the while the community are ignored and watching more of our community space being engulfed by grey bunkers of bureaucracy. “Labor is the party of jobs, we always welcome new jobs but we stood with the community when they demanded this development should have been built in the centre of Gosford. “Now this development has been revealed to simply be a money-making venture by a Liberal Party donor,” she said.

500 pages of documents on airport released