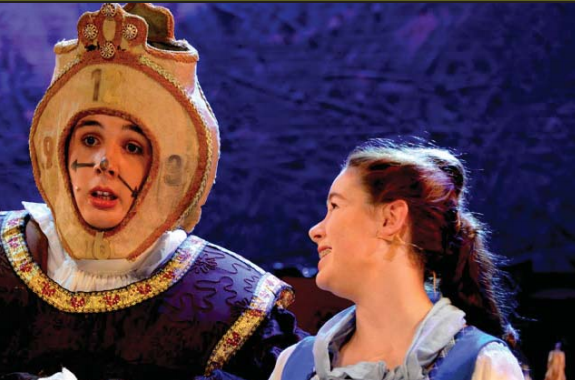 Jake Vernon-Elliot as Cogsworth and Kasey Barnes as Belle

Central Coast Grammar School’s Director of Performing Arts, Mr Lee Fleming, has reflected on the school’s latest production, Beauty and the Beast, and the lengthy process of bringing the fairy tale to life.

“Bringing a production from the script to the stage is no mean feat,” Mr Fleming said. “It takes an incredible amount of collaborative and cooperative work between students and teachers and the behind-the-scenes effort is enormous. “What is beautifully presented on the stage, starts all the way back in January, when the very fi rst ideas of what the show might be are carefully considered by the creative team.

“I have so many people ask how we decide what to do,” Mr Fleming said. “When we’re making decisions about what to stage, we do so based on what is achievable, and what can be delivered to our high standards,” he said. This year, the creative team used an unconventional selection process; hosting blind auditions so that students who auditioned had no idea what they were auditioning for. “I had not yet made a decision about what we would produce, and I wanted the show to ‘fi t’ the students who were auditioning,” Mr Fleming said. “Students were asked to sing, act and or dance, and based on the strength of the auditions, it was clear that Beauty and the Beast was the best choice to showcase the depth of student talent and cater to a large number of middle school students who auditioned for the ensemble.” “All in all, there are about 125 students and 15 staff involved in the process from beginning to end.

“There’s so much happening behind the scenes that the audience will never see, from gaining performance rights, casting, set and costume design and construction, makeup design, orchestra selection and the gruelling process of rehearsals and character development.” Nobody understands this process more than Year 11 student, Aaron Carey, who spent well over 60 rehearsal hours transitioning from a quiet CCGS student, to male lead in the production as the Beast. “The Beast is an iconic Disney character, so I wanted to make sure I did him justice. “I spent a lot of time researching the role in other productions to see where I could try something new and different. “I experimented with different voices and accents, and had to put in lots of work in front of a mirror to practice the poor Beast’s many angry outbursts, something which I’m not used to,” Carey said. For Carey, school productions represent an opportunity to give something back to the school community through doing the things he loves, music and acting. “Productions always mean lots of laughs, theatrical antics and a wonderful way to meet new people and make new friends,” said Carey.

“The highlight of Beauty and the Beast was the fantastic opportunity to work with so many talented, like-minded students who were passionate to create a beautiful show. “I connected with many people I had not even met before, forming strong new friendships through the entire creative process,” he said. For the creative team driving the show, staging a beloved family favourite also came with some nerves. “I was excited about Beauty and the Beast, but I also knew it would be arduous work to bring it to life in the manner it deserved,” Mr Fleming said. One of the productions’ most energy driven numbers, ‘Be Our Guest’, was a seven minute long number that involved almost the entire cast.

“To see the incredible reaction to ‘Be Our Guest’ from the audience each night was astounding,” said Mr Fleming. “The round of applause after this particular number on the final night went on for over 60 seconds, and had some people standing mid-show, truly a testament to every single person involved. “Central Coast Grammar School productions are always hugely successful and this year, Beauty and the Beast, lifted the bar even higher. “We have a great team of staff who bring an impressive level of professionalism and passion for the arts to our productions,” said Mr Fleming.

“This year our incredibly talented students were fully committed and very well prepared for the run of shows, and this rippled through the whole cast. “Young ensemble members were watching and learning from our senior students and it inspired them to step up. “Our fantastic orchestra and set, wardrobe, and makeup team, brought the goods to make Beauty and the Beast a CCGS production to remember. “I’ve already had people asking what we’re doing next year,” Mr Fleming said.