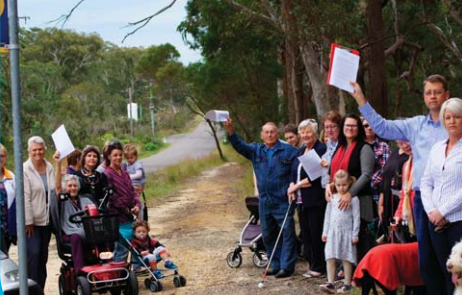 A large group of the residents gathered to talk with the State Member for Swansea, Ms Yasmin Catley, and former Wyong Councillor, Mr Doug Vincent, to present a petition. The residents have called on Council to finish the construction of the pathway along Tall Timbers Rd to the lake at Karoola Ave to enable residents to ride mobility scooters, walk children in strollers, walk dogs and ride bikes in safety, off the road. At present, the residents either walk on the road or the uneven ground at the side of the road, whilst cars, buses and trucks pass, according to local resident, Mr Malcolm Smith. “Since the initial pathway was constructed from the Pacific Hwy to the Macquarie Shores Village, the large volume of pedestrian traffic has confirmed the importance of the completion of the pathway,” Mr Smith said.

“The number of people now using the path between the Pacific Hwy and Chain Valley Bay is remarkable,” he said. Central Coast Council Administrator, Mr Ian Reynolds, officially adopted a budget for the 2017-18 financial year that will see a total of $1.9m expended on footpaths for the whole Central Coast LGA. That allocation had been $2.5 million in the draft budget that was circulated for community comment, but was reduced to $1.9 million, without explanation, in the version of the budget officially adopted by Mr Reynolds. Mr Smith said he described the budget cut as “flying backwards and ridiculous”. “There are more and more people moving in here and they will use the path if it is built.

“They along the road now because it is unsafe,” he said. “We are aware of the proposed pathway from Mannering Park to Kingfi sher Shores and Gwandalan, and that two possible routes are being considered, but this could be years away, and we do not think that we should have to wait that long to be able to walk in safety,” he said. Mr Vincent said: “The residents in the ‘forgotten north’ pay the same rates and fees as the rest of the Coast, however they don’t appear to receive their fair share of the council’s budgetary spend. “If you compare what infrastructure and projects are completed in other areas and what is completed in the north, there is a stark difference,” he said. “The residents in the north deserve better.” “Residents in the north are continually seeking the installation of connecting pathways between suburbs, shops, schools and other facilities”, Mr Vincent said.

“Furthermore, I have not heard local residents saying they want their rates spent developing an airport as they believe this not a matter for Local Government or a Council with limited funds. “In general, northern residents say are looking for better services and community infrastructure in their local area. “They would like to see the Council spending the rates and levies they pay, in the areas they live in, and not on black hole projects down south” Mr Vincent said. Ms Catley said she was very supportive of the community’s push to complete the pathway and would continue to raise the issue with Central Coast Council Administration.