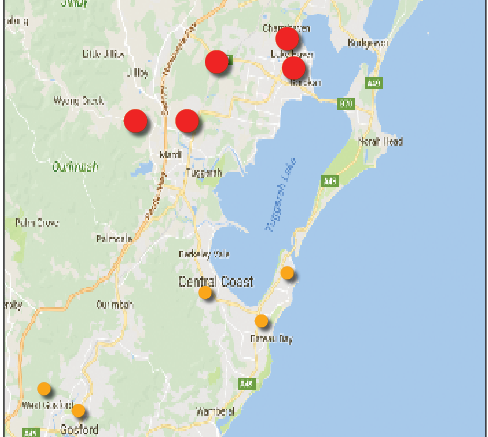 The Northern Lakes Disability Tourism Precinct Committee has called for an independent audit of the Central Coast’s environmental and human health, due to ongoing concerns about air pollution from coal fired power stations and coal ash dams, the detection of toxic fire-fighting chemicals in soil and surface water and the detection of local cancer clusters.
“What I am calling for is a complete environmental and health audit of the region,” said founder of the committee, Mr Gary Blaschke.
“We really do need an independent one,” environmental and disability activist, Mr Blaschke, said.
Mr Blaschke said he had spoken with the Central Coast Local Health District, the EPA and local politicians about his concerns.
“I’ve put it to both Mr David Harris, Member for Wyong and Ms Yasmin Catley the Member for Swansea, are they with us or not?” he said.
“Several reports have recently been released that show cancer clusters 20 per cent above the state average in our region, according to the Torrens University of SA.
“Another by Environmental Justice exposed the massive air pollution problems we have,” he said.
“Remarkably, the suburbs named in the three year health study by the Torrens University Public Health Information Development Unit, happen to be within very close proximity to the environmentally destructive ash dam and smoke stack issues of the former Lake Munmorah and existing Vales Point Power Stations.
“All authorities, EPA, both NSW and local governments especially, have let the regional community down from Morisset, Cooranbong to Wyong, Blue Haven, Doyalson to Buff Point and all surrounding suburbs.
“Those who we put in place to look after our welfare, have failed miserably with a multitude of oversights, possibly life threatening and environmentally devastating issues that have been raised for decades by active community representatives.
“These two issues of health and environment alone have been swept under the carpet by the EPA for many years.
“When it was found recently that Delta had breached their license five times in one month in 2016, they received the equivalent to a slap on the wrist for doing so.
“Self-regulation needs to stop and accurate Government monitoring needs greater attention,” Mr Blaschke said.
He said he believed that the suburbs of Wyong, Charmhaven and Gorokan had cases 20 per cent above the state average for nine different types of cancer, because of their proximity to Vales Point, Colongra and Lake Munmorah power stations.
“Over a five year period, 23.5 per cent of winds blew from the North, North-North-East or North-East, mostly in the warmer months when we are outdoors,” he said.
“The rates of cancer feather out the further away from the stations you move and yet the only air pollution monitoring site is at Wyong racecourse,” he said.
According to Mr Blaschke, the approval of the Wallarah II coal mine would only add to the region’s health and environmental problems.
“The Torrens University report is a warning that we have a problem, and if we don’t take note of that warning, we have failed miserably.
“I think there are enough good people on the new Central Coast Council to warrant going to them and addressing them on this issue,” he said.
“The health of the Central Coast is absolutely paramount and these issues need to be resolved if we are to go ahead and promote the area,” he said.