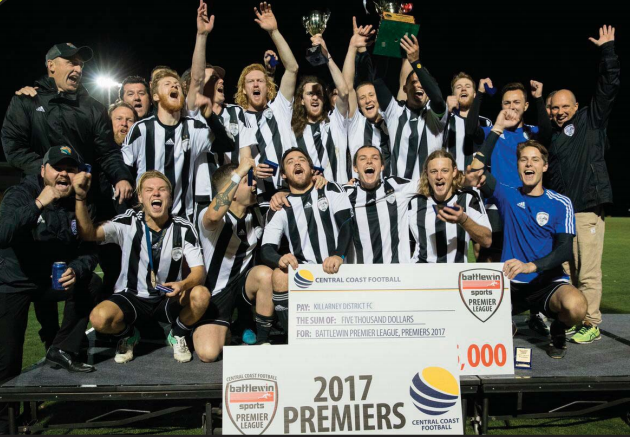 Gosford City FC has been defeated by Killarney Vale DSC in the Central Coast Football Battlewin Competition, going down 4-0 at Pluim Park.

The Match was played on Saturday, September 16, with a strong local crowd turning out to see the two rivals go head to head in a replay of the 2016 Grand Final. Gosford City were defeated by Killarney Vale in the Major Semi-Final 7-1, and knew that they needed to produce some of their best football if they wanted to defeat the local powerhouse, Killarney Vale District Soccer Club in the grand final. With Killarney Vale winning the third grade competition and the second grade competition earlier on the day, the first grade team wanted to make it three from three, to end the season with a perfect display. A strong crowd gathered to see some of the best football talent on the Central Coast, however, Gosford were unfortunate to concede in the first five minutes, with Killarney Vale striker, Daniel Roger, scoring an opportunistic goal.

The first half was a tight affair, and Gosford knew that they now needed more than one goal if they wanted a chance of defeating the 2017 minor premiers. Unfortunately, Gosford were dealt a blow when their fi rst choice goalkeeper needed to be substituted, in the first half. The fi rst half saw a variety of chances to both teams, however, the score at the end of the first half would remain 1-0 in Killarney Vale’s favour. Both teams entered the sheds at half time knowing that the second half would have to be their best half of football for the year if they wanted to be crowned champions of the Central Coast. Chances fell to both teams, however, it was Killarney Vale who were able to get the better of Gosford after some nice football resulted in a tidy finish from Killarney Vale, who were able to take the lead 2-0.

Gosford were unable to create any chances after this, despite their best efforts, as Killarney Vale had gathered the momentum and were in full control of the game. Gosford’s hopes of winning the Grand Final were dealt a massive blow after a screamer from Killarney Vale’s, Matt Hall, all but sealed Gosford’s fate, as Killarney Vale took a 3-0 lead. At this point, Gosford were hoping to not concede seven goals, as they knew that things could start to get ugly. Gosford never really troubled Killarney Vale’s defence, however, Gosford’s defence was consistently called into question. Another goal from Killarney Vale, to make it 4-0 after some quality football on their behalf, guaranteed that they would take out the title for two consecutive years. Gosford began to get frustrated, and a lack of discipline resulted in them conceding a penalty in the last minute. Killarney Vale player, Tim Knight, went to take the penalty, knowing that Gosford had no chance of staging a comeback, and blasted his penalty into the crossbar, going over the fence. The full time whistle confirmed Killarney Vale’s dominant display. Gosford have now been runners up for three consecutive years.