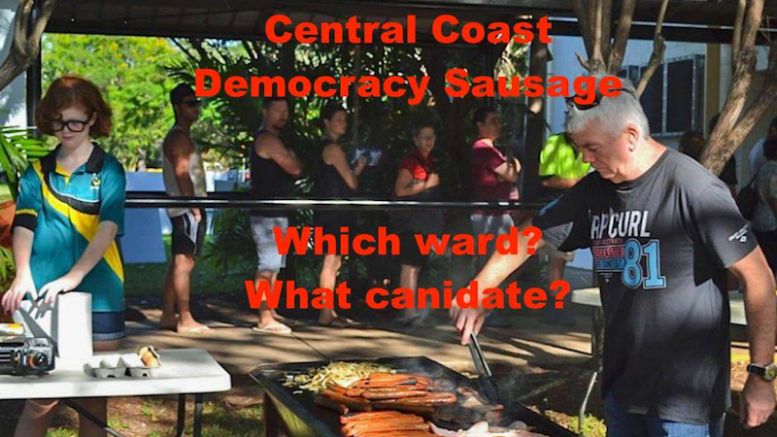 Central Coast elections are on. Which ward and what candidate?

On Saturday, September 9, the community of the Central Coast will make history by electing 15 Councillors, the first democratically elected team to govern in the new, enormous Central Coast Council for a three-year period.
In addition to sacking the elected representatives of the former Wyong and Gosford Councils, the NSW Government also carved up the new Central Coast Local Government Area into five wards: Budgewoi, The Entrance, Wyong, Gosford West and Gosford East.
Residents of each Ward will be able to elect three Councillors to represent their particular area of the Coast.
The Ward boundaries have been a surprise to most. The Wyong Ward reaches into the heart of the former Gosford LGA, as far south as Wyoming, Narara and North Gosford.
The first challenge for every voter before September 9 will be to check and confirm which Ward they actually live in.

We’ve asked all the lead candidates from all the 5 wards a series of questions about their visions and plans for their particular area and the region as a whole.

Three councillors will be elected from each of these 5 wards in a preferential system similar to the NSW upper house elections.

Click through to your ward – we’ve compiled this page to allow you to link though to each of the ward pages.

Budgewoi ward – The northern ward called by some candidates “the forgotten north”. Who’s standing, what are the issues?

Wyong Ward – The central ward presents the most controversial battle ground with the ex-mayor of Wyong standing.

The Entrance Ward – The eastern beaches ward that stretches south of The Entrance and inland.

Gosford East Ward – The south eastern ward radiating out from Erina and Terrigal is the so called ‘silver tail’ ward.

Gosford West Ward – The largest ward that stretches inland from Woy Woy and Gosford all the way out west.