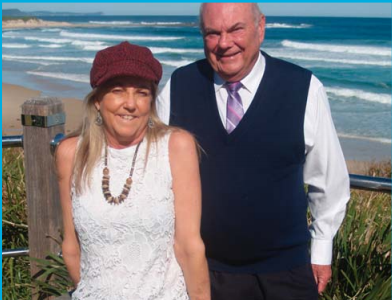 Mr Bob Graham, former Mayor of Wyong and long-standing independent councillor, has bowed out of contention in the September 9 election, but said he was happy to know that there will be other independents to fill the gap.
“Out with the old, and in with the new,” Mr Graham said.
“There are some good people who have served on both councils, but we need some new blood,” he said.
Ms Julie Watson, independent candidate in the Budgewoi Ward, said she hoped to be the new, fresh, independent voice for the people.
“While Julie and I are two very different people, when it comes to local issues, we find plenty of common ground,” Mr Graham said.
“I’m a ‘little’ older, and maybe wiser, on Council processes and intricacies, but Julie has a renewed innovative vision for the Coast and is full of ideas to take the brand new Central Coast Council forward in a positive way,” he said.
“Julie will work with communities and individuals with a mandate to ensure total satisfaction for Coasties by means of her exceptional communication skills and ability to motivate the people around her.
“We both have an affiliation with Soldiers Beach Surf Life Saving Club.
“While I was able to support much-needed funding to implement the new Surf Club which has been built, Julie was a past Surf Life Saver and her son was a nipper at Soldiers for many years.”
Ms Watson said she would draw on her large network of community groups, business groups and, indeed, Mr Graham himself, to gather their expertise and wisdom.
“As an independent candidate, if elected, I will be your representative by advocating for issues across the collective community that is the entire Central Coast Region, with a focus on the interests of jobs for residents, businesses and start-ups, looking after our beautiful surroundings and lifestyle, and promoting transparency through leading by example,” she said.
“In particular, I will make sure that the communities in the north are forgotten no more.”
Ms Watson said she was passionate about ensuring that the Central Coast develops a ‘smart city’ mentality and has sound links within the Central Coast, Sydney and the world’s vibrant start-up community.
Source:
Media release, Aug 11
Julie Watson, independent for Budgewoi Ward