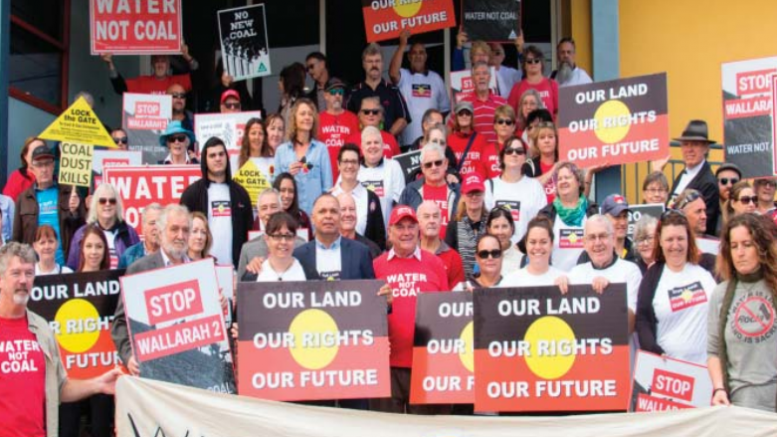 The Wallarah 2 Coal Project has been referred back to the Independent Planning Assessment Commission for determination.
Member for Wyong, Mr David Harris, and the Australian Coal Alliance (ACA) have, however, called on NSW Premier, Ms Gladys Berejiklian, to intervene and use her powers to stop the underground long-wall coal mine from going ahead.
Mr Alan Hayes from the ACA has also indicated that the group would consider taking legal action to stop the mine.
The proposal, submitted by the Wyong Areas Coal Joint Venture, was to develop and operate an underground coal mine near Wyong on the NSW Central Coast.
NSW Planning’s Executive Director of Resource Assessments and Compliance, Dr Oliver Holm, said the Department had referred the assessment to the Commission for a final decision.
“Following a second merit review by the Commission in May, the Department finalised its assessment, addressing the Commission’s recommendations, and has referred it to the Independent Commission for final decision,” Dr Holm said.
“The Department remains satisfied that the project is in the public interest, and is approvable, subject to the draft conditions of consent,” he said.
“We amended and strengthened the draft conditions in response to the Commission’s recommendations.
“The project will provide real and

significant economic and social benefits for the Central Coast region and for NSW as a whole, with employment opportunities for around 450 people during construction and 300 during operations.”
An initial proposal from the proponent was referred to the Commission for merit review in 2014.
The Commission made 35 recommendations to avoid, mitigate or manage the project’s predicted impacts and considered that, if adopted, there would be merit in the project proceeding.
An amended proposal from the proponent was submitted to the Department in 2016 taking into account the 35 recommendations made by the Commission, and publicly exhibited in July for a six-week period, attracting around 680 public and agency submissions during the exhibition.
According to the Department, it had carefully considered community feedback and the Commission’s recommendations from the 2014 and 2017 merit reviews in finalising the assessment report.

Member for Wyong, Mr David Harris, said the Department of Planning’s announcement flew in the face of Central Coast residents and their overwhelming opposition to the proposed Wallarah 2 Coal Mine.
The department is satisfied that the mine is in the community interest, despite receiving more than 700 submissions overwhelmingly opposing the proposal, Mr Harris said.
Mr Harris said he condemned the Premier, Ms Gladys Berejiklian for hiding behind the process and demanded she used the power she has to immediately stop the proposal.
“Former NSW Premier, Ms Kristina Keneally, had the courage to say no, using the precautionary principle,” Mr Harris said.
“Former Liberal Premier, Mr Barry O’Farrell, promised to do it and Mike Baird failed to do it,” he said.
Gladys Berejiklian has the opportunity now to fulfil the Liberal Party’s promise made in 2011.
“Millions of dollars were spent on securing the Central Coast water supply in 2007 after 10 years of drought.
“This infrastructure was based around the importance of the Wyong Water Catchment Area, so why would we place this at risk?” Mr Harris said.
He said the opponents of Wallarah 2 had committed to continuing the fight, particularly after the findings of the impacts on the Sydney water catchment of the Dendrobium mine in the Illawarra.
A technical report into the impacts of the Dendrobium underground coal mine found seam to surface connected fracturing, groundwater diversion and drainage, landscape slippage and valley bulging causing fracture pathways for leakage from below reservoirs in Sydney’s water catchment area.
Opponents of the Wallarah 2 project have argued that it would have similar impacts on the Central Coast water supply.
The Lock the Gate alliance said the Dendrobium report revealed that water which should have fed Sydney’s dams and drinking water supply was being drawn into the mining voids and that management actions had failed to prevent damage or protect Sydney’s drinking water supply.
Australian Coal Alliance (ACA) campaign director, Mr Alan Hayes, said: “It is unacceptable that the suggested water management actions to be implemented for this mine may fail to prevent damage and fail to protect the Central Coast’s drinking water.
“The NSW Premier must commit that the planned longwall coal mine will not proceed,” Mr Hayes said.
“To do otherwise is nothing more than chicanery and collusion with the Department of Planning,” he said.
“There are still a whole raft of questions that remain unanswered from the Planning Assessment Commission hearings.
“The main ones being water and subsidence.
“Through the whole of this process, the Department of Planning has assessed this project subjectively.
“How can we make this mine happen for Wallarah 2?
“Even if there was only a one per cent chance that the water catchment would be adversely impacted, that’s still unacceptable odds.
“The Government cannot afford to put at risk the major town water supply area for more than 300,000 people.
“The withheld report by the Department of Planning has shown that rainfall essential to the Sydney water supply is being lost to coal mining beneath their catchment area.
“The water management actions put in place for the mining were doomed to fail.
“We cannot lose our water to Wallarah 2 the same way.
“The ACA has had discussions with its solicitors and will seek, when required, to implement legal options now available to it to guarantee the protection of the town water supply,” Mr Hayes said.