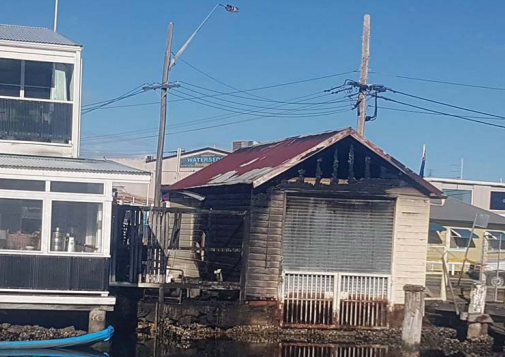 Part of the Woy Woy waterfront was cordoned off as a crime scene following a suspicious fi re at a boat shed on the morning of Wednesday, August 2.

Minor traffic diversions were put in place around The Esplanade and Brick Wharf Rd with an exclusion zone of 100 metres. Fire and Rescue Central Coast’s Inspector Bob Barton said the fi re started at around 4.25am and was attended by three fi re trucks, police and ambulance.

The timber-clad six metre by three metre shed with a steel roof was owned by NSW fi sheries but, according to Mr Barton, it was mostly empty apart from some tools. Fire crews and emergency services worked throughout the morning to contain the blaze and prevent it from spreading to nearby structures. What started the fi re remains unknown and investigations are ongoing. The fi re did not spread to the adjoining Fisherman’s Wharf restaurant, Mr Barton said.