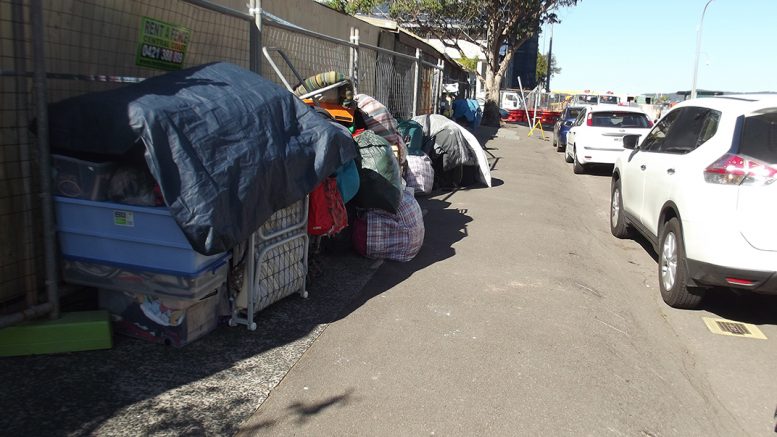 Over 40 homeless people who regularly used Froggys and the old Brisbane Water County Council building in Mann Street as a squat, have been moved on to make way for demolition.
Their belongings were taken out of the site on August 16 and placed on the Baker St footpath, opposite the Central Coast Leagues Club.
Wooden boards were placed over the wire fence to prevent access, and 24-hour security guards and dogs were deployed to protect the derelict site.
Mr Cain King, from CKDS Architecture, had announced that demolition was due to commence in June.
However, those responsible for the demolition had found it difficult to gain access to the site with tools and equipment going missing and workers allegedly being chased and threatened by the homeless people.
Mr King said he believed that up to 40 people were calling the squat home on any given night.
“It has been a real eye opener,” Mr King said.
“They don’t teach you how to deal with these sorts of social issues at architects’ school,” he said.
Mr King said the plight of those using the discarded buildings as shelter had prompted him to seek out a closer relationship with Coast Shelter to find ways to alleviate the plight of the city’s homeless. 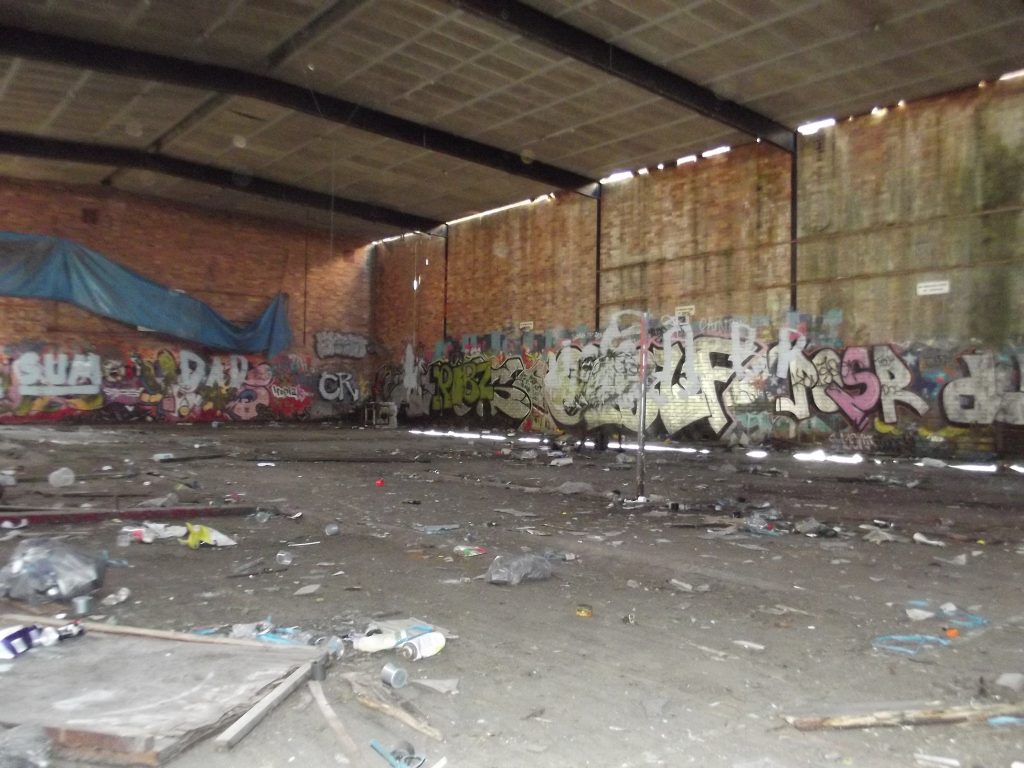 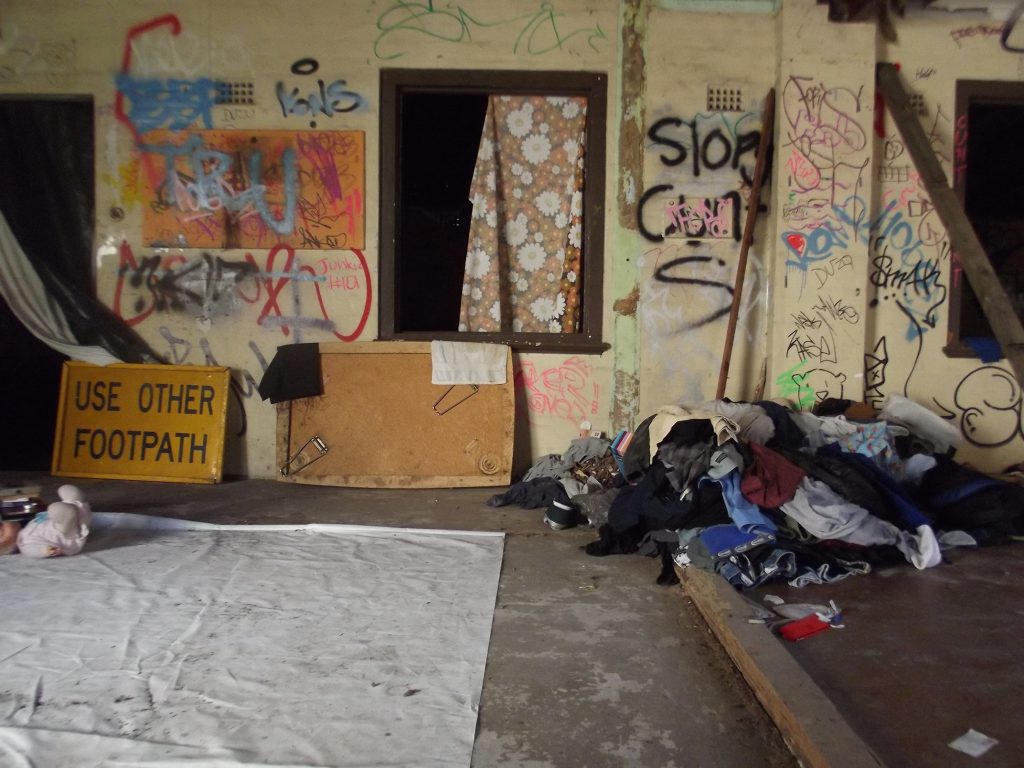 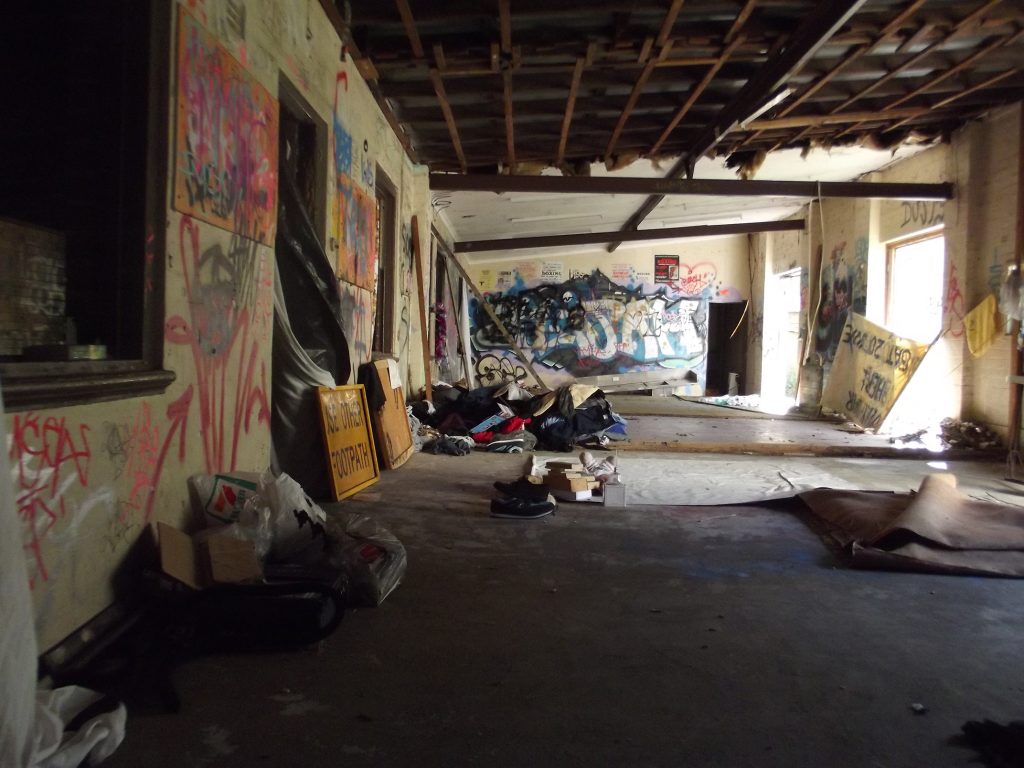 Laurie Maher, the CEO of Coast Shelter, said that he knew there were issues on the site.
“I know that they’ve been having troubles there, both with the squatters and the young people setting fires and so on,” he said.
The security guard at the gate to the buildings said the homeless that lived there had been harassed by school children.
“They told me about the kids in grey uniforms,” he said.
“They were scared of them.”
He pointed out the pile of drink bottles designed as an early warning system that the homeless people had set up at the opening to their sleeping area.
When they heard the bottles being disturbed they would attempt to hide.
Ms Deborah Thurgar, who lived on the site, said she had put up wire and bits of metal in some doors and windows to prevent bottles being thrown by school children from coming in.
She said that she had spoken to the police once about the issue.
Detective Chief Inspector (DCI) Glen Trayhurn, of the Brisbane Water Local Area Command, said that while there were alleged instances of threats made on the site, none were reported.
“If there are any instances of crime, we encourage people to report it to the police,” he said.
“We will continue to patrol the area.”
Despite having lived at Froggys, Ms Thurgar said she was not technically homeless.
“I’m not actually ‘homeless’ homeless, I have a property and a house,” she said.
“But I left and haven’t been home since my son went to gaol.”
Mr Maher said the situation Ms Thurgar had was not the norm.
“That’s very uncommon as far as we’re concerned,” he said. 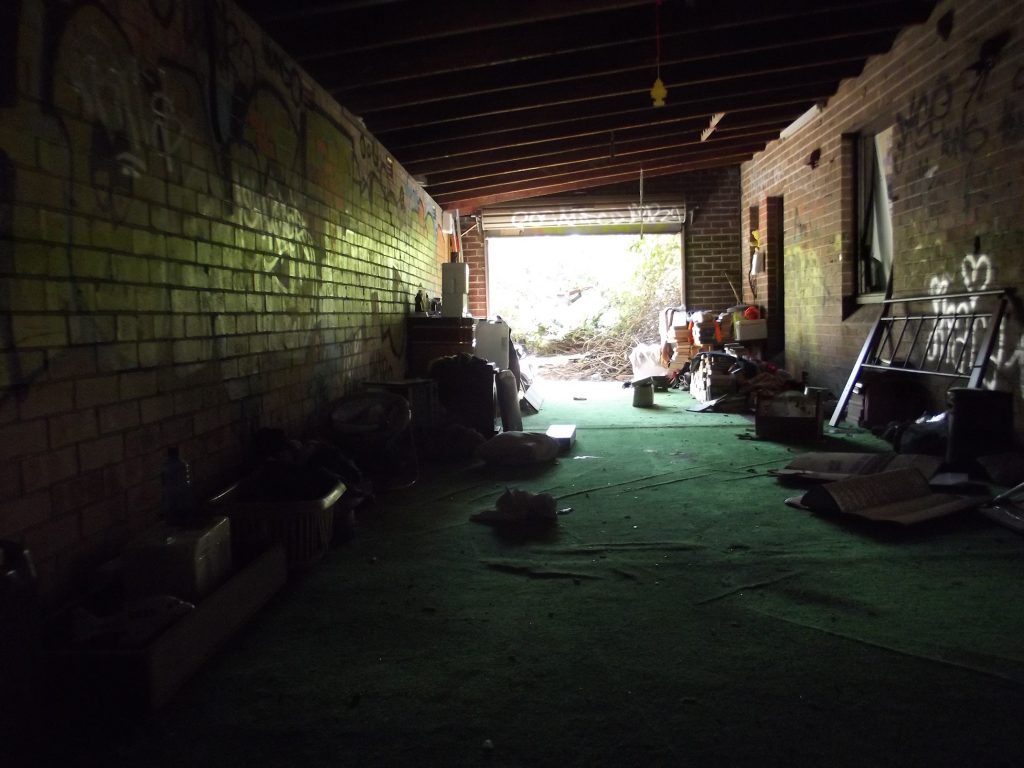 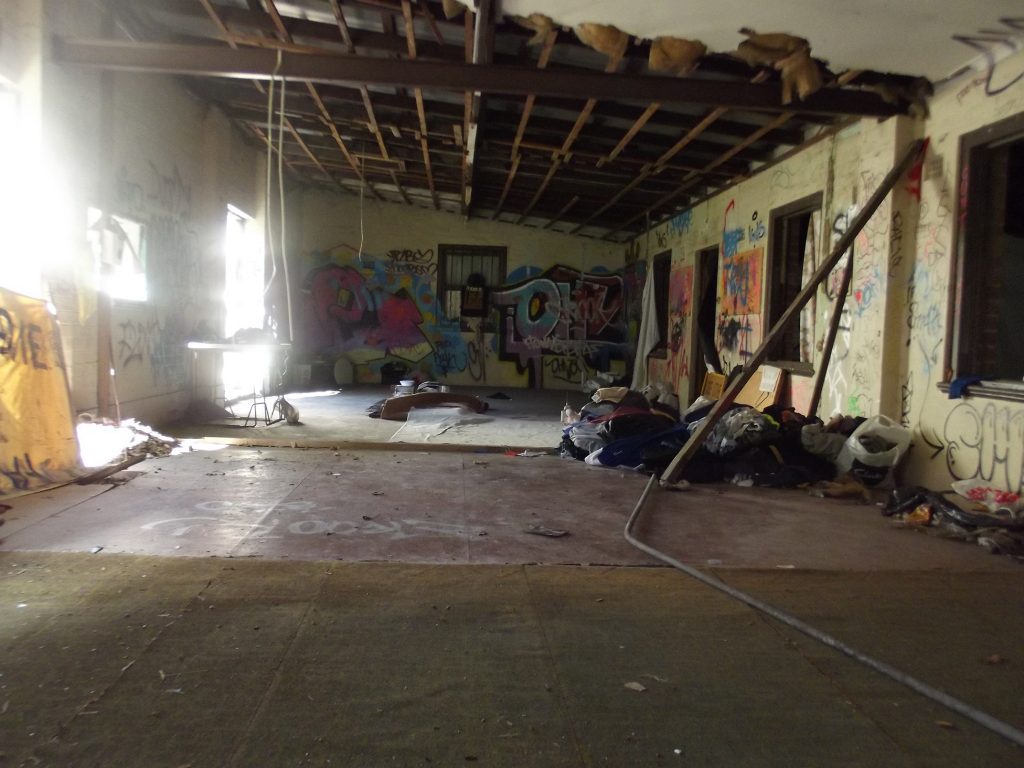 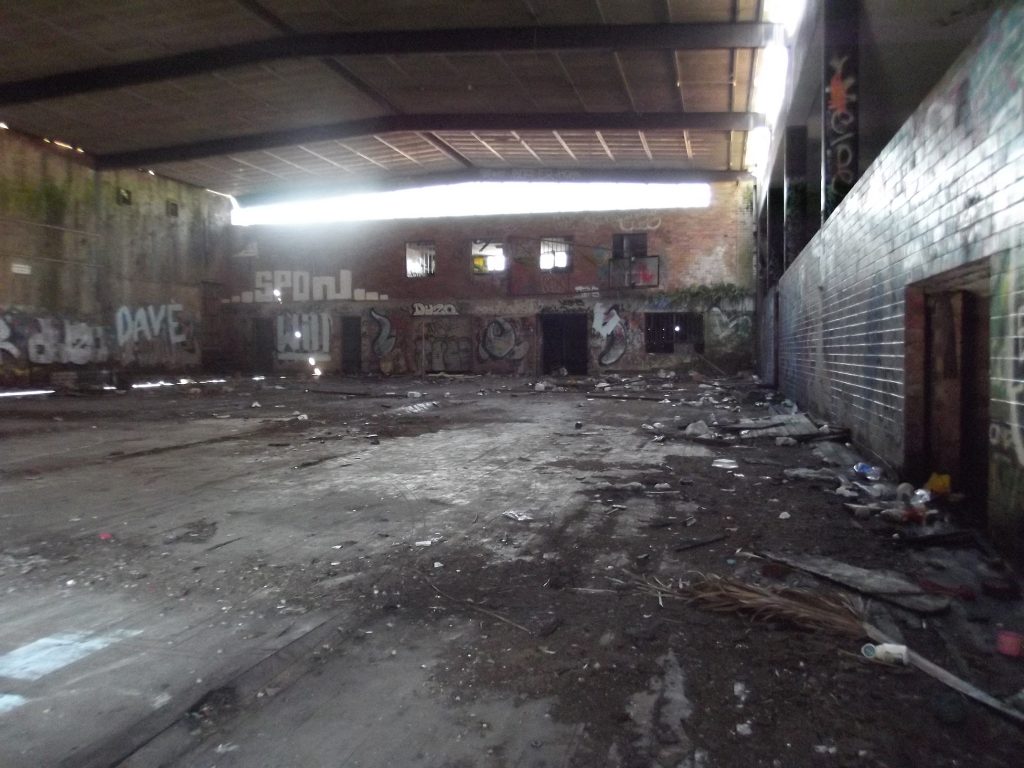 He said the best way to combat the problem of homelessness was more affordable housing.
“The State Government has just got to face up to issues that the biggest problem with homelessness is affordability of rental accommodation, that’s state-wide,” he said.
“Some research suggests that there are up to a million empty residences across the country at any one time.
“The State Government has got to come to the party in relation to the problem.”
Ms Thurgar said she had set up a washroom area in the building, as well as a lounge room and bedroom.
She said she even had a room set aside for people who were passing through, so they would not inconvenience those already living there.
Mr Maher said he had no idea there was such a semi-formalised arrangement in the building.
Ms Thurgar said she had organised a vehicle to move the homeless people’s belongings from outside Froggys to an area of bushland behind Gosford TAFE.
DCI Trayhurn said the police had nothing to do with the eviction, but it was private property, and any people using it as a residence would be doing so unlawfully.
“From our point of view, it’s privately owned, there are gates, and it is a building site, so it has its own dangers,” he said.
Mr King said that the demolition works to be completed on the site, to make way for the commencement of the triple-tower Waterside development, had been rescheduled.
He also said that it was not true that the behaviour of the homeless people on the site had been used as an excuse to delay demolition works and that the real reason for the delay was that the developer did not have the funds needed to commence the project. 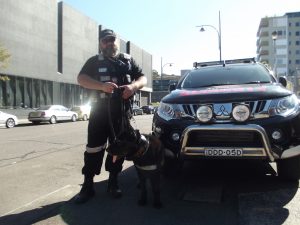 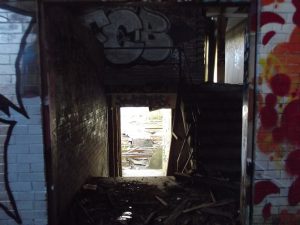 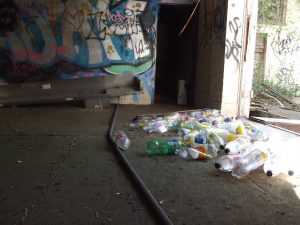 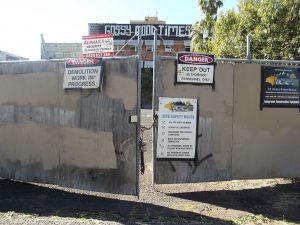 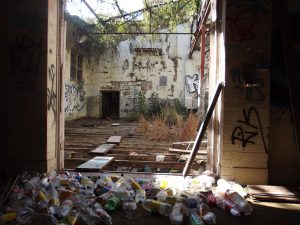 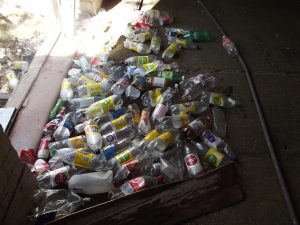 “We will have to change the program, as certain buildings will have to be demolished first because they are the ones that the homeless people want to occupy,” he said.
“We have been having client meetings and they are all go, they are looking for commencement by the end of 2018.
“Once we have completed the demolition, we will need to make a Section 96 application to comply with the conditions of consent and put staging in place for the project.
“We will have the documentation ready to start pre-sales in September and we are engaging with real estate agents.”
The Waterside developer is New Hong Kong Macau Pty Ltd, Chinese investors who are based in Australia, Mr King said.

Hard to sustain growth with a 43 per cent rate rise

Wicks accused of being two faced over roads funding