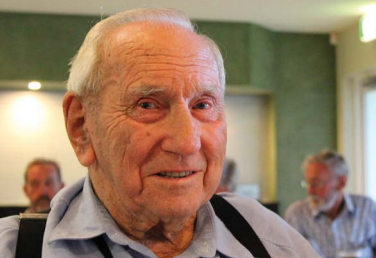 The long-time Peninsula resident, former pharmacist and active Rotarian passed away on the morning of Sunday, July 23. According to fellow Rotarian Mr Geoff Melville, Mr Radford leaves behind a legacy of compassion and community service to the Peninsula and wider Central Coast. Mr Radford was born in March 1920, and got his start as a pharmacist in Sydney before moving to Wagstaffe in 1938 and opening his Ettalong Pharmacy in 1945. Not long after putting down roots in Wagstaffe, Mr Radford joined the Rotary Club of Woy Woy.

Already a well-respected member of the community, Mr Radford who had become aware of the Peninsula community’s medical issues through both his pharmacy and Rotarian work, attracted attention when he purchased an amphicar in 1965. From 1945 to 1965, Mr Radford would row himself and wife Pat, from Wagstaffe to Ettalong Beach and home again, as they tended to their pharmacy.

During this time Mr Radford would also row around Brisbane Water delivering medicines. In 1965 and after years of planning, Mr Radford purchased his first amphibious automobile, which he used to drastically improve his deliveries. Mr Radford operated the amphicar for a decade. Before the Rip Bridge was built at Ettalong in 1974, the only way to get to Empire Bay was through Gosford, an hour’s drive along notoriously unkempt roads. In the amphicar, it took Mr Radford minutes to cross the Brisbane Water.

The sight of Mr Radford seemingly driving atop the water delighted locals and visitors to the region. Mr Radford joined Woy Woy Rotary Club in 1951 and served as a life member for 64 years. Mr Radford was also the fi rst president of the Wagstaffe Pretty Beach Progress Association. Several friends of Mr Radford have paid tribute to him. Dr John Irvine of Pearl Beach said: “Aren’t we all so lucky that in our short speck of life on this planet, we came across someone as uniquely talented as Rod Radford; such a wise, caring and capable guy right to the end.

“God grant that we could all finish our sojourn in similar form.” Mr Steven Gagau said: “Such great sadness but our comfort is the great celebrations of the accomplished life of Rod Radford that has blessed our lives forever.” Ms Candice Christie said: “I remember him fondly during my exchange year with Rotary in 1990 and during my visits since. “An incredible service he gave to others through his work with Rotary.” Mr Melville delivered a eulogy at his funeral that refl ected on his life with Rotary. “There are more than a million Rotarians in this world and Rod Radford stood tall among them,” Mr Melville said.

“In the early years, Woy Woy Rotary would join the Rotary Club of Gosford, their mother club, on community service projects. “Rod was always quick to volunteer. “He was a member of the Woy Woy Club for 42 years, joining the Rotary Club of Umina Beach in October 1993, where he has been a valued and active member until his recent passing. “An incredible total of 66 years of continuous, active and involved Rotary service to our community. “Most of this carried a 100 per cent attendance record. “Until some fi ve weeks ago, Rod was still producing our club’s weekly bulletin, called the Torque.

“Rod never looked for recognition, but he was presented a Rotary Paul Harris Fellowship Award. “Paul Harris started Rotary International, just 15 years before Rod was born. “Rod received two Sapphire Pins to add to this award as well as a Service above Self award from Rotary International. “This was a one-off special award and, so far, is the only one of its kind that has ever been presented,” Mr Melville said.

“In May last year, the Rotary Club of Umina Beach honoured Rod Radford’s service to Rotary and the community with the unveiling of a sandstone monument, on the waterfront at Ettalong Beach. “The plaque tells the story of the famous amphicar and all it meant to the people of the Woy Woy Peninsula. “When I sent emails out after of Rod’s passing, it wasn’t surprising to receive dozens of accolades from Rotary District Governors, Rotarians, former Rotary Youth Exchange Students, school principals and teachers, who all held this man in such high esteem. “On behalf of all the Rotarians in District 9685, I celebrate the dedicated service and fellowship that Rod Radford continually extended to this community. “He always delivered Service above Self, far beyond what would ever be contemplated from a Rotarian,” Mr Melville said.