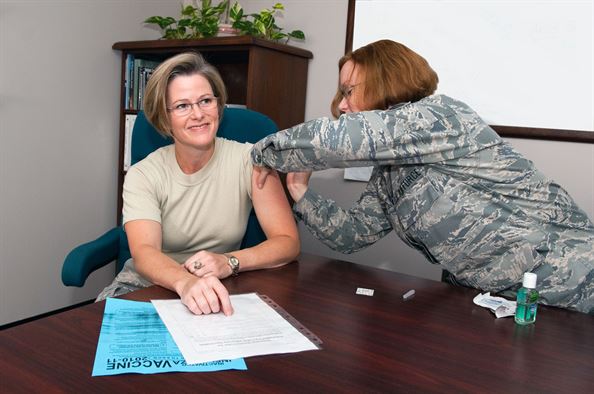 A regular flu shot being administered

NSW is continuing to experience one of its worst flu seasons on record, and the Central Coast has not been spared, with 44 per cent of recorded cases in the region confirmed as influenza.
August is traditionally the worst month for influenza and NSW Health said: “Influenza activity is expected to remain high for the next few weeks.”
In July 2016, there were 4,431 cases in NSW, compared to July 2017, when there were 14,032 cases.
The figures for the Central Coast Local Health District were released in NSW Health’s Influenza Surveillance Report for the week of July 24-30, 2017.
In the week ending July 30, there were 4,690 notifications of influenza confirmed by polymerase chain reaction (PCR) testing.
The Central Coast had 152 influenza notifications occurring in a rate per 100,000 population.
The report also calculated the rate of the previous four weeks as a comparison, with the Coast recording 58 notifications occurring by the same rate.
NSW Shadow Minister for Health, Mr Walt Secord, said the Berejiklian Government had been caught unprepared for the state’s flu surge and that the outbreaks were putting pressure on the entire health and hospital system, particularly the state’s Emergency Departments.
“NSW hospitals are at breaking point and the Berejiklian Government should have prepared a comprehensive plan to urge families to get their preventative vaccinations and they should have arranged for proper rostering to prevent bed block and delays,” Mr Secord said.
Despite the seemingly large percentage, the Central Coast has fared much better this flu season then some of its neighbouring health districts, with Western Sydney, Nepean-Blue Mountains, Northern Sydney, Sydney, and Southern NSW all recording higher percentages.