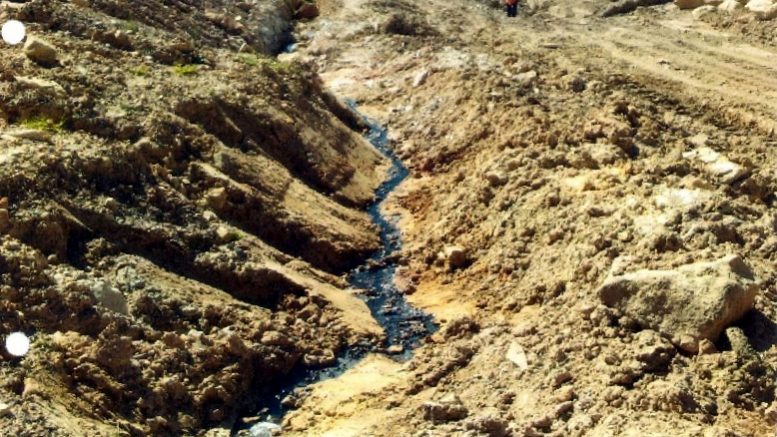 A photo from a September 2012 inspection of the landfill

Former Gosford Council employee and independent candidate for the Gosford West Ward in the Central Coast Council election, Mr Gary Chestnut, said it was essential that the NSW Government held an inquiry into how the Mangrove Mountain landfill morphed from a small golf course remodelling project into an improperly regulated dump the size of a regional waste facility.
Mr Chestnut remains subjected to a confidentiality agreement he entered into with Gosford Council as an outcome of a constructive dismissal case, so he is only able to comment on matters that are in the public domain.
As a result of extensive Government Information Public Access (GIPA) searches, documents have been placed on the public record that enable Mr Chestnut to provide more information on issues that, he said, need to be properly explored by a full commission of inquiry.
According to Mr Chestnut, the former Gosford Council’s decision to enter mediation with landfill operator Verde Terra, instead of prosecuting the company in the Land and Environment Court, was based on incomplete and incorrect information from both the EPA and from members of Council’s own staff.
Mr Chestnut said that whilst employed by Gosford Council, he had recommended against approval of the original DA for the golf course remodelling.
Because the original DA was for clean fill, no leachate barrier was required.
Over time, from as early as 2001, the EPA made amendments to the Mangrove Mountain Landfill’s licence conditions and expanded the types of waste allowed.
Mr Chestnut said a leachate barrier and leachate collection system were required from 2003 but were not installed until 2009.
A leachate barrier and leachate protection system should protect potentially contaminated leachate from the landfill leaking into the aquifer located below the landfill or flowing into the surrounding environment and waterways.
Central Coast Council has refused to release a 2005 compliance report, that Mr Chestnut has seen, and that documented the landfill’s “compliance and non-compliance” with each condition of consent.
From the early 2000s until 2011, Mr Chestnut had no direct involvement with managing Council’s conditions of consent at Mangrove Mountain Landfill.
In December 2011, he received a letter from the NSW Office of Water stating that the Mangrove Mountain landfill was non-compliant.
He directed the letter to Council’s then manager of education and compliance and senior compliance officer, who also had due regard to the 2005 compliance report.
In April 2012 the senior compliance officer informed both the NSW Office of Water and the waste operator that the site was operating within its consent.
Mr Chestnut said he believed the senior compliance officer’s interpretation of the conditions of consent that Council had applied to the site were “grossly incorrect”.

Mr Chestnut also received internal advice that everything at the Mangrove Mountain landfill was in accordance with the Council’s consent.
As a result, he advised the then Greens Councillor, Mr Peter Freewater, who had received concerns from the community, that the landfill was not operating within its consent.
Ms Chestnut then asked the senior compliance officer what the site looked like and he was told that there was “a hill” and “a hole”.
Mr Chestnut advised him to take photos.
A senior compliance officer and the manager of education and compliance did not show Mr Chestnut the photos for several weeks.
Mr Chestnut said he “really freaked out” when he did see the photos.
“Everyone in the compliance section had had the photos for weeks, but within hours of my seeing them, I had worked my way up through the hierarchy of directors all the way to Council’s solicitors,” Mr Chestnut said.
Multiple briefing sessions followed with all of Council’s directors, and decisions were made to take action against the landfill operator.
According to Mr Chestnut, Council and the EPA did joint site inspections in 2012 and the EPA led Council to believe the leachate on the site was not a problem, that it was safe and secure.
“I would have advised Council that it would have to prosecute a case against the EPA for being in breach of its statutory duties had I known that was not the case,” Mr Chestnut said.
Instead, based on what he considered to be the EPA’s expert advice, Mr Chestnut said the agreement Gosford Council entered into with Verde Terra was based on incorrect advice from the EPA.
So the 2014, court orders, and even the fact that Gosford Council was prepared to enter into mediation, was based on incorrect and incomplete information about the safety of the site, Mr Chestnut said.
Central Coast Council commenced a Class 4 prosecution against the landfill operator and other parties in the Land and Environment Court (LEC), but was required to enter mediation as part of the LEC’s protocols.
Based on the EPA’s advice that the leachate at Mangrove Mountain was properly managed, the Councillors agreed to mediation.
An offer was made to Verde Terra which it rejected and sent three options back.
All parties attended the mediation but the final agreement, which was a combination of two of the Verde Terra options, was between Gosford Council and Verde Terra.
According to Mr Chestnut, during the mediation process, Verde Terra tabled a letter of support from the EPA, and the former LEC judge that was overseeing the mediation told Mr Chestnut that Council had to reach a compromise with the landfill operator.
The letters of offer from Verde Terra, in relation to the heads of agreement, were all based on an additional 1.1 million cubic metres.
To date, there has been no explanation of why Council offered to accept 1.3 million cubic metres.
GIPA documents also show that Mr Stephen Beaman, from the EPA, inspected the site in 2011, and the only thing he raised was the installation of a weigh bridge to collect the EPA’s $138 per tonne waste levy.
“In fact, he went to great lengths to explain the importance of the levy collection and explained that severe penalties would be imposed if the environmental levy was not paid, but the inspection report was totally silent on any non-compliance at the site and even whether the site was actually inspected for compliance.
“The EPA made three subsequent inspections to check on the weigh bridge, but were, again, completely silent on site compliance.”
The NSW Premier, Mr Gladys Berejiklian, has not answered calls for a full commission of inquiry into the Mangrove Mountain landfill.