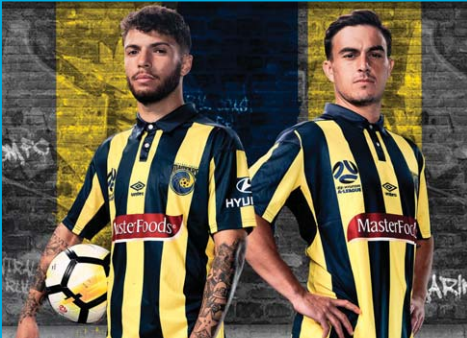 The new Central Coast Mariners Strip for the 2017/18 season

The Central Coast Mariners have unveiled their new playing kits, and announced the contract extension of Mars Food Australia’s MasterFoods brand as a key sponsor for the A-League 2017- 18 season.

The Mariners vowed to ‘earn their stripes’ in the 2017-18 season, symbolised by a bold, new home kit. The Umbro home kit features a traditional football top with a button up collar and classic, vertical yellow and navy stripes. Partnered with the collared top are navy blue board shorts and navy blue socks, a signifi cant design shift from the predominantly yellow home kits of the recent past. To embrace the surf culture of the Central Coast, the Mariners have worked with Umbro to incorporate longer style shorts that will be worn with the home kit. The home-shorts also double as board shorts, and can be worn in the ocean during the Central Coast summer.

For the away kit, it’s a return of the navy blue sash which runs diagonally across a predominantly yellow jersey that will be worn on the road this season. The away top does not feature a collar and will be partnered with yellow shorts and yellow socks. Central Coast Mariners CEO, Mr Shaun Mielekamp, spoke about the club’s fresh mentality to earn their stripes and what it means both on the pitch and in the street. “It is time to earn our stripes,” Mr Mielekamp said. “Earning our stripes means much more than just wearing this season’s jersey,” he said. “As a football club, we are heading into a new chapter in our proud history. “A chapter that, if executed correctly, will see the Yellow and Navy restored with pride, and the badge worn proudly by Mariners, both on the Coast and beyond. “It is also the time that we call on the thousands of members and fans to unite in showing their support for the team, wearing our stripes, representing our community and making us proud to be a Mariner.

“This will help show that we are still the community club, and that when anyone travels to Central Coast Stadium, they are guaranteed a great time in the stands and a tough time on the pitch,” Mr Mielekamp said. Mielekamp also spoke about the motivation behind the club’s bold design shift and new distinct features. “The challenge was set from the owner to have a kit that not only aids high performance on the pitch, but also looks great whether you’re in the stands, on the street, or even at the beach. “This kit is a result of more than 18 months of design work that involved the very best global designers from Umbro in the UK, personally meeting with Mike Charlesworth. “Apart from all of the obvious design features, the home strip even includes extra length shorts that, believe it or not, are designed to be capable to surf in, yes that’s right, boardies.

“It was an amazing challenge coming up with a playing strip that fulfi lled such a unique brief. “We were inspired by a lightbulb moment, thanks to a sitcom called Ripping Yarns, that was mentioned by Mike Charlesworth. “He had no knowledge that we have a local team called Barnstoneworth, here on the Central Coast, as he was trying to describe a comic scene about football shorts. We then saw the scene that famously quotes ‘shorts don’t matter in football, the only thing that matters is, what’s inside them’. “We stumbled across a classic football design we all loved, and when converted to Yellow and Navy, not only did we have a great design, but one that allowed us to have a performance short which worked as a board short also.

“Crazy story I know, but look at what has come from it, possibly the best kit in the history of the club,” Mr Mielekamp said. In addition to the new kit, Mariners and football fans alike can be assured that the iconic MasterFoods sauce bottles will continue as a mainstay in front of Central Coast Stadium’s palm trees during home games. Their logo will remain proudly emblazoned on the front of the new-look striped home kit and the back of the striking sash away kit. Mars Food Australia are an internationally recognised, local company, that directly employs over 300 people on the Central Coast, with the company’s leading edge factory and head offi ce based just kilometres from the Mariners’ Centre of Excellence in Tuggerah. The Mariners have been proud to call MasterFoods a major partner since the inception of the A-League, and have been renowned for innovative activations that have grown to be one of the most effective and recognisable brands in the competition.

Mr Mielekamp said he thanked MasterFoods for their ongoing support and outlined how crucial the Club’s partnership was with the coast based manufacturing company. “The Central Coast Mariners cannot thank MasterFoods enough for their support,” Mr Mielekamp said. “They have been our longest serving and most signifi cant corporate partner since day one,” he said. “The MasterFoods brand has become synonymous with the Central Coast Mariners and this is something that we are very proud of. MasterFoods are a shining example of a business who are truly out to make a difference, so it’s fantastic to have them located here on the Coast and a committed supporter of the Yellow and Navy,” he said. Mars Food Australia’s Chief Financial Offi cer, Mr Andrew Poll, said the local company was proud of the long-standing relationship with the Central Coast Mariners. “We believe in the benefi ts of developing strong connections throughout our community. “The Mariners create the largest regular community gathering in our local area, and we’re proud to be a key part of that,” he said.