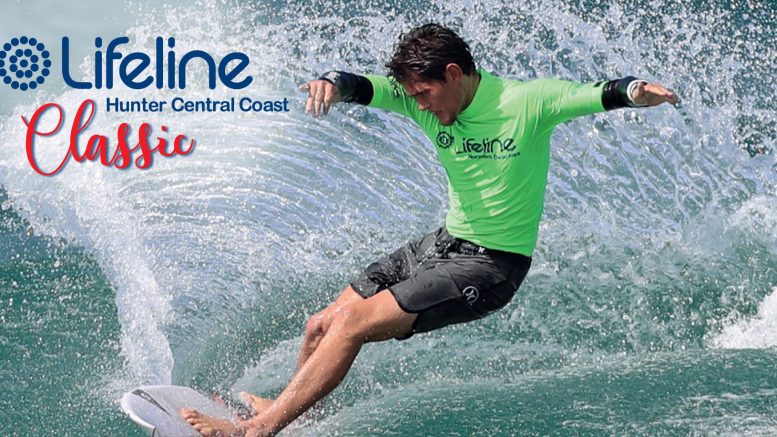 Local surfers have an opportunity to enter a surf competition and raise funds for Lifeline’s local suicide prevention services.
The Lifeline Central Coast Classic will be held at Avoca Beach on Saturday, October 28.
New local Lifeline regional manager, Mr Rob Sams, said entries are now open for fundraising teams of four to enter.
Each team runs their own fundraising campaign to reach a goal of $5,000.
The team will be given their own page on the Everyday Hero online fundraising website.
On the day, each team will be joined by a pro surfer who will surf with them on the day.
One of the surfers who will join a team is event ambassador and Central Coast surfer, Ms Jess Grimwood.
The event has a special significance for the 28-year-old Bateau Bay resident and North Shelley Board Riders Club member.
Her family was helped by Lifeline after she attempted suicide two years ago.
Ms Grimwood is recovering from post-traumatic stress disorder from her work as a fire fighter.
She said she received lots of help and support in hospital, but Lifeline were there for her family.
“This event is so important because it will help raise awareness of the prevalence of mental health issues on the Central Coast as well as the importance of suicide prevention,” Ms Grimwood said.
“I encourage all fellow Central Coast surfers to get involved in what will be an awesome day,” she said.
“As a surfing community, we all know someone who has been impacted by suicide or is dealing with mental health issues.
“When I was low, I stepped away from surfing, but it has been so helpful in my recovery,” Ms Grimwood said.
Mr Sams said Lifeline provides a range of services for those who are in crisis or feel overwhelmed; from the 13 11 14 crisis number to face to face counselling, training, support groups and other community suicide prevention activities.
“All funds raised will go to running those services and in turn help us to make the Central Coast (and Australia) free of suicide,” he said.
Lifeline Hunter Central Coast saves around 5,000 local lives each year and provides support to thousands of others.
Twice as many people die by suicide as do on our roads, and tens of thousands of attempts are made each year in Australia.
Suicide is the most common cause of death for people aged 15 to 44.

Suicide prevention walk to be held at Umina Beach