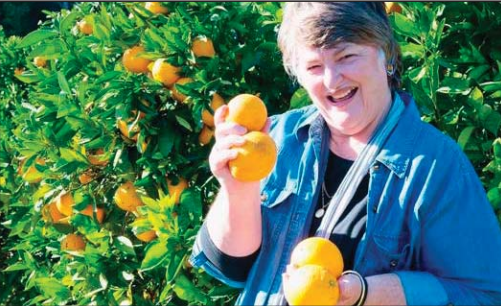 Kulnura farmer Ms Lorraine Wilson will stand as an independent candidate for the Gosford West Ward in the Central Coast Council election on September 9.

She said an independent presence on the council was needed to counter political decisions and agendas. “It is also time that ratepayers on the Central Coast Plateau, an area more than half the size of the Central Coast region, have independent representation on the Central Coast Council,” Ms Wilson said. She said that the area was a valuable source of food for the local region and customers from Sydney and Newcastle. As an advocate for local agricultural production, Ms Wilson said that land suitable for the task will become more valuable as Sydney’s suburbs expand into former farmland. Sustainability for the future will be Ms Wilson’s focus. She said she hoped that the ability to live and work on the Central Coast would be an option for her fi ve grandchildren. Her great grandfather and two other relatives were part of a committee that chose the name of Kulnura for the region. Ms Wilson is currently chairman of the Central Coast Plateau Chamber of Commerce. She said she was aware that Gosford West Ward had a broad range of issues that required attention and said she has the tenacity to make a difference.