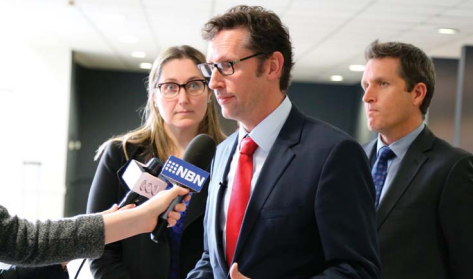 “Noraville resident, Mr Barry Egan, told the Committee about his two-year battle with NBN and Telstra, likening the experience to an episode of Yes Minister. “He said that he spoke with over 100 representatives of NBN, Telstra and other government bodies; had 11 technician home visits; and had fi ve Telstra complaint managers and two members of the Telecommunications Industry Ombudsman (TIO) looking after his case. “We heard from Mr Mark Beatson, whose 24- hour gym in Lake Haven suffered an ongoing fault which left his business without CCTV or personal duress alarms for customers.

“Mark said he spent thousands of dollars on equipment during the outage, in addition to spending around 80 to 90 hours dealing with his provider and waiting for technicians, a fi nancial loss he won’t be compensated for. “We heard from the Central Coast Rudolf Steiner School in Fountaindale, where students still can’t connect to the NBN, despite the suburb being live and the NBN rollout map showing that the nearby cemetery can connect.

“We heard from too many customers whose f i b r e – t o – t h e – n o d e connection is delivering speeds well below the 100 megabits per second that their retailers advertise and that they are paying for,” she said. Ms McBride told the Parliament that her electorate had been at the forefront of the NBN rollout. “There are now fi ve different NBN technologies across the Central Coast, and we are seeing all of the problems with this patchwork multitechnology mix,” she said. “The TIO’s most recent annual report found that four of the top 10 postcodes nationally for NBN complaints are on the Central Coast. “It’s no surprise. “My electorate offi ce has been inundated with complaints about the NBN.

“The blame shifting between NBN Co, providers and government just has to stop. “I am pleased that the parliamentary committee gave local residents, business owners and schools the opportunity to provide their feedback. “The Prime Minister promised Australians that his NBN would be fast, rolled out sooner and cheaper. “He was wrong. “We need action now. “This has to be fi xed,” Ms McBride said.