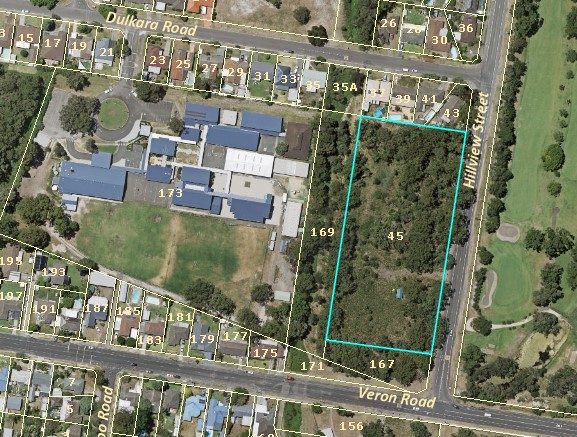 An aerial view of the proposed nursing home site

Central Coast Council has refused the application to build a 160-bed nursing home on a 1.66 hectare site at 45 Hillview Street, Woy Woy.
The $27.8 million application sought to modify a previously-approved DA from 2006 for a 60-unit self-care seniors’ living development to the latest proposal for a160-bed residential aged care facility.
According to an assessment report prepared by Central Coast Council staff, the proposed modifications to the original consent would have included an additional storey to result in a three-storey building and changing a pitched roof to a flat roof.
Car parking in the Section 96 application was actually reduced from 75 spaces to 53 and both the internal layout and external appearance of the development were altered.
The staff report recommended “Council as consent authority refuse consent to the Section 96 (2) Part 7 application to modify Development Consent 30219 to the approved Senior Living and Ancillary Facilities.”
The reasons given in the report to justify refusal included that the proposal was not substantially the same development originally approved and modified.
“The proposal involves radical transformation from that approved,” the report said.
“The proposal is not essentially and materially the same development due to the significant increase or change in floor space, height, number of storeys, value of the development, internal layout, external appearance, shadow impact, and change of use.”
Other reasons for the refusal were listed as: “The additional impact on the vegetation in the conservation zone by increased overshadowing, buildings closer to root system of trees, use of non-native species in landscaping, and construction of timber boardwalk through the conservation area.”
The community has been campaigning to protect the gazetted ecologically endangered community of Umina Coastal Sandplain Woodland located on the site since 2004.
An application for a Seniors Living development containing 41 dwellings together with community and recreational facilities was refused by the former Gosford Council at its meeting of February 1, 2005.
The applicant appealed Council’s refusal to the NSW Land and Environmental Court.
During the Appeal, the proposal was amended to 39 units.
The Court subsequently upheld the Council’s refusal.
The Court’s reasons for upholding Council’s refusal were that even though the applicant produced a Species Impact Statement (that had previously not accompanied the application) to the Court, the Court ruled that the Council could not have determined the application without having sought the concurrence of the Department of Environmental and Conservation.
A new application was lodged and development consent was granted on May 14, 2007, for Seniors Living and Ancillary Facilities (indoor swimming pool, basement car parking and community hall), subject to conditions.
This consent approved 37 self-care units.
The UCSW on the land was preserved and protected by a positive covenant in an existing development consent and registered on March 18, 2008.
“This consent has been modified five times and the current development contains 56 self-care senior living dwellings, including a community hall, indoor swimming pool, 75 car parking spaces, car wash bay, ambulance bay and bushland conservation area,” the staff report said.
“The approved development contains basement car parking and two residential levels above with a pitched roof.
“Following a preliminary assessment of the current s96(2) application, Council advised the applicant that the changes resulted in the development not being substantially the same development.
“It was suggested to the applicant that the s96(2) application be withdrawn and a new development application be lodged.
“The applicant submitted legal advice that they wish Council to determine the current s96(2) application.”
According to the assessment report that recommended refusal of the latest application, the addition of one floor would have raised the ceiling height from 7.85 metres to 11.05 metres above ground level.
“The applicant contends that as the additional floor level is essentially contained within the former roof space, the change to the overall height is minor and has not significant additional impact.
“This is not agreed with.
“Such a qualitative change is not consistent with the character of the area and is not substantially the same development,” the report said.
Many of the 28 objections submitted by community members also pointed out that the previous consent had expired as physical commencement had not been achieved by the developer.
Council’s staff assessment report did not agree with the community in this regard.
“Due to site clearing, registration of the positive covenant, erection of fencing and signage to protect the UCSW, preparation of a Bushland Management Plan and water and sewer connections being carried out prior to May 14, 2012, Council confirmed on May 30, 2016 that the consent had physically commenced.
“Therefore, the current consent has not lapsed and may be modified.”
In conclusion, the staff-prepared assessment report said: “A residential care facility or nursing home is a facility which is needed in the community and is generally supported.
“However the change to the original and current consent is beyond that under s 96(2) as the proposal is not substantially the same development.
“A new development application should be submitted with a proposed building of two storeys consistent with the character of the area.
“The impact of the proposal on the character of the area and the bushland in the conservation area is greater than that previously considered acceptable.
“The assessment concludes that the proposal is not substantially the same development.
“The proposal is a radical transformation from that previously approved.
“The use, internal layout, and external appearance are completely different.
“The increase in overall height and change to roof line increases the bulk and scale and creates additional overshadowing in the afternoon in the winter time on the vegetation to be protected in the conservation area.
“The proposal is not essentially and materially the same development,” the report said.
The applicant has the right to appeal in the Land and Environmental Court under Section 97 of the Environmental Planning and Assessment Act 1979 six months after the date on which the applicant receives notice in respect to Council’s decision.