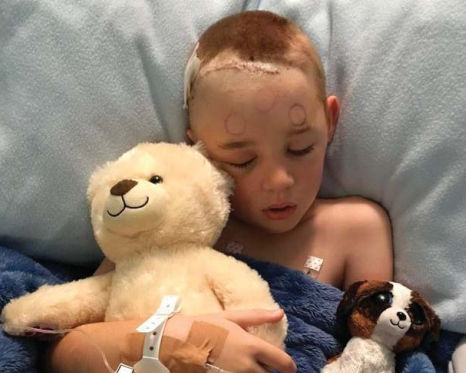 Toukley Golf Club has raised more than $10,000 through a Go Fund Me campaign to assist a Toukley family with their son’s recovery from cancer.

Eight-year-old , Logan Haanskorf, was diagnosed with a brain stem glioma, a tumour on his brain stem in the centre of his brain, earlier this year. The news was devastating to Logan’s family who were celebrating six years of Logan’s mother, Ms Rachel Haanskorf, being cancer free after an extensive battle with breast cancer. Logan was admitted to Westmead Children’s Hospital on July 4. Within an hour after admission, a neurological surgeon came to explain that a team of oncologists, paediatricians and neurological surgeons, were meeting early the following day to look at Logan’s scan to try to put an action plan together to remove the tumour. Unfortunately, Logan’s tumour was positioned in the centre of his brain and it wasn’t going to be an easy task to remove it. The position of the tumour made the surgery high risk, but there was no other treatment option.

A week later, on July 11, Logan underwent an eight-hour surgery to remove as much of the tumour as possible. The Doctors managed to remove around 90 per cent of the tumour, but some of it was too close to important brain tissue and couldn’t be removed. During his surgery, Logan suffered a stroke, which blocked a major artery in his brain affecting the entire left-hand side of his body, his face, his voice, his left hand, arm and wrist, the entire left leg, ankle and foot. He stayed in ICU for nine days while the nurses did a constant balancing act between heparin and adrenalin to thin his blood and raise his blood pressure at the same time, to try to force it through the blocked artery in his brain, while also making sure not to cause another bleed. Logan’s eyes have also suffered considerable damage, the tumour had damaged the nerves in his right eye to the extent that he can no longer see clearly, nor look up or right with that eye. The stroke has also affected the nerves in his left eye in that it struggles to look left and track properly. Due to the extensive damage the stroke has caused, Oncology decided to wait for any chemo or radio therapy, until after Logan’s six month MRI, to check on the progression of the tumour. Logan now needs ongoing occupational therapy, physiotherapy, speech, psychological assistance, child life therapy, as well as a wheel chair, hand, foot and back braces, additional home and school care and major optical work.

“Even after all he has endured over the last five weeks, Logan is so grateful and appreciative of all that he has,” Ms Haanskorf wrote. “Logan physically looks different, his speech has altered, his physical movements are awkward and he mentally performs differently, but behind that cheeky smile, he is still Logan, a boy with a quirky sense of humour and roguish charm. “He is a very determined and motivated 8-year-old boy who wants to prove to his surgeons, therapists and doctors that miracles can happen,” she added. Toukley Golf Club launched a Go Fund Me campaign for the Haanskorf’s on August 18. “It is with your help that we’d like to give them the financial support to assist in ongoing medical expenses, bills, rehabilitation, adjustments (structurally/ furniture/equipment/ resources) needed at home and school, and any specialist care Logan will need to ensure he is given every opportunity to succeed and every opportunity to get the very best out of life, and to allow Logan’s parents and family to focus on getting Logan home, where he can then begin the next steps in his recovery,” a spokesperson for the Club wrote on the Go Fund Me page. Since its launch and as of August 23, the campaign has raised $10,630 of its $15,000 goal. To donate to the campaign visit the Go Fund Me website and search for the Little Logan’s Journey campaign.