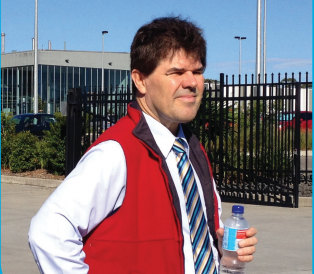 Former Wyong Mayor, Mr Doug Eaton, appears to have failed in his bid to stand as a Liberal Party candidate in the Wyong Ward for the first election of Central Coast Council.

There was still a slim possibility that he could be preselected for the Ward of Budgewoi, but the decision was in the hands of the party’s State Executive, as Wyong Regional Chronicle went to print. The NSW Liberal Party head office would not confirm the outcomes of the preselection held on Saturday, July 29, to choose candidates to stand in all five Wards for the new Council. Wyong Regional Chronicle was advised that the outcome of the preselection was “unofficial” until candidates were endorsed by Liberal Party head office. Several “gaps” remained on tickets in some Wards, and the Liberal Party head office was charged with fi lling those gaps. It was expected to announce candidate endorsements once all gaps were filled. Mr Eaton put himself forward as a nominee in the Wyong Ward only. It is understood that he withdrew nominations for the Wards of Budgewoi and Gosford East, prior to the preselection.

According to Liberal sources who did not wish to be quoted, former Gosford Councillor, Mr Chris Burke, was preselected as number one candidate for the Wyong Ward, the only position considered winnable by the Liberals in that Ward. Ms Jilly Pillon was preselected as the number one Liberal candidate in The Entrance Ward. Mr Troy Marquart was preselected for the Gosford West Ward. Ms Rebecca Gale Collins and Ms Kerryanne Delaney were preselected in the Gosford East Ward, where the Liberal Party believes it can get two councillors over the line in the September 9 election. Following Mr Eaton’s withdrawal from the ballot for Budgewoi, Mr Burke and Mr Marquart were the only nominees to stand in that ward.

Due to the fact that they received number one positions in Wyong and Gosford West, there were no contenders left to stand for preselection in the Budgewoi Ward. Liberal Party sources said they believed negative media reports in the week prior to the preselection, including the collapse of the Chappie Pie China Time Theme Park concept, and a referral to ICAC over a land transaction, had worked against Mr Eaton’s preselection. The NSW Executive of the Liberal Party was expected to act quickly, within the week, to fi ll the Budgewoi position and endorse all other candidates.

This would give Liberal candidates a campaign advantage over NSW Labor which, due to internal disputes related to its own preselection processes, may not endorse its candidates until two days before candidate nominations with the NSW Electoral Commission close at 12 noon on Wednesday, August 9. Once the candidates were endorsed to positions that the Liberal Party considered winnable, they would invite other candidates to stand with them, so each Ward had a Liberal Party ticket consisting of three candidates. Mr Eaton did not return calls when Wyong Regional Chronicle approached him for an interview on Monday, July 31. According to Mr Eaton’s Linkedin profile, he is currently Chairman of Central Coast Group Training, where he has been a director since 2002.

He also sits on the board of The Art House, Wyong. He spent three years as a member of the NSW Parole Authority and is Principal of Douglas Eaton Solicitors. He holds a Bachelors Degree in law and commerce from the University of NSW. Mr Eaton was first elected to the position of Mayor of Wyong Shire Council as a Liberal in 1996, he then held the position as an Independent in 2010- 11, and again from 2012 until the Council was dismissed and replaced by Central Coast Council in May, 2016.