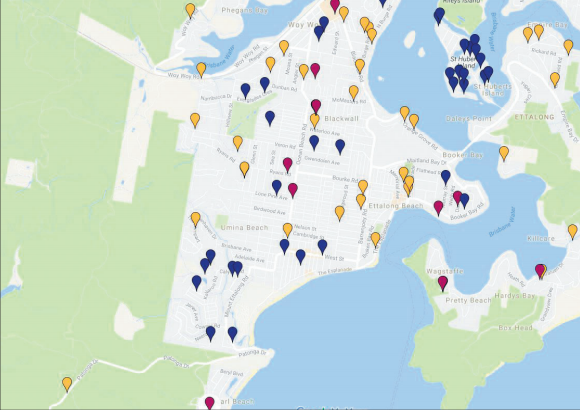 Over $2 million worth of capital projects on the Peninsula that were due for completion in 2016-17 have been carried over into the current financial year.
One of the biggest projects was a $500,000 water mains upgrade project at Woy Woy, which was one of the five largest from across the whole Central Coast LGA to be continued from 2016-17.
Another of the major projects was the nearby Koolewong Boat Ramp Upgrade valued at $610,000.
“The project continuation requests represent those capital projects that, for a number of reasons, were not completed in 2016-17,” said a report to the August 7 Extraordinary Meeting of Central Coast Council, which gave approval for the projects to be carried over.
“It is a normal part of Council’s operations that some projects are not completed by June 30 in any given year,” the report said.
“Where possible offsets from the 2017-18 capital program have been identified to counterbalance the continuation of projects from 2016-17.”
Offsets have not yet been identified to cover all carried-over projects
“It is proposed to identify offsets … as part of the 2017-18 quarterly budget review process to ensure that a financially sustainable capital expenditure program of $207.9 million is delivered to the community in 2017-18.
“At the end of each quarter, Council’s capital expenditure program will be reviewed and adjusted as a result of project delays and phasing, variation to estimates, protracted procurement processes, development approvals, changed priorities, adverse weather conditions, availability of support funding and other factors,” the report said.
Other Peninsula projects that have been carried over were the construction of a cell and cover material at Woy Woy tip with a budget of $178,000.
According to the report to Council, the project has been deferred and its scope reduced.
Another $168,000 worth of drainage in Shepard St, Glenn St and Carpenter St at Umina will also continue into 2017-18.
Capital work on the sewer treatment plant at Woy Woy that has been carried over into the current financial year has been estimated to cost $128,467 with another $120,000 still to be spent at the plant on aerator baffles in the current year.
The upgrade of a sewer pump station at Cowper Rd, Umina, worth $106,000 has been deferred and its scope reduced.
Smaller items of sewer capital work at Woy Woy that were outstanding from the previous financial year were $84,000 for EDM critical valves and $80,000 for low-voltage switchboards at the sewer treatment plant, and $20,000 for a high voltage switchboard.
The McEvoy Oval upgrade at Umina will also continue into the current financial year and has a budget of $70,000.
Outstanding work on the Ferry Rd Wharf at Ettalong has been budgeted at $50,000 for completion in the current financial year.
Another small capital project that has been carried over at Patonga is a water pump station refurbishment costing $12,300.