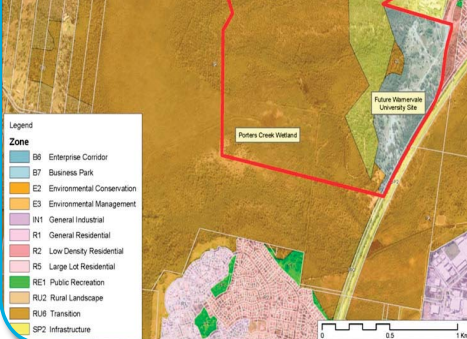 The Central Coast Council’s biodiversity certification proposal for land south of Sparks Rd, Warnervale, within part of the Wyong Employment Zone, may be ready for exhibition in late 2017.

“It will also assist with the planning for the expansion of development opportunities in a location where signifi cant employment and infrastructure investment is expected to occur over the next decade,” the statement said. The Central Coast Greens said that they remained opposed to the entire biodiversity certification process across the State. “It is a blatant gift to the property development industry, so that the normal process of checking for threatened plants and animals can be avoided, and hectares of important habitat bulldozed for profit,” a written statement from The Greens, Central Coast said. When the NSW law relating to bio-banking changed in late 2016, Greens MP, Dr Mehreen Faruqi, said in Parliament: “We have totally incomplete legislation; we have no fi nal codes; we have no biodiversity offset methodology; we have no native vegetation map; we have no codes of practice for managing wildlife interactions; and we have no urban vegetation State environmental planning policy… “A paper by John Hunter, an ecologist and lecturer at the University of New England, found that the automated mapping system that uses pattern-recognition technology delivers just 17 per cent accuracy in identifying and determining individual plant communities in the Upper Hunter Valley,” Dr Faruqi said.

“Yet it is this automated mapping, and self-certification, that lies behind the biodiversity certification that the Council, under an Administrator, seeks,” Dr Faruqi said. “Biodiversity offsets are often not even established before the environment is ruined. “In fact, it could take hundreds of years before an offset replaces a destroyed ecosystem, if ever. “The evidence is there; it is just that biodiversity offsetting has become a very convenient and fl awed answer to a vexed question, and creates a false illusion that we can continue with business as usual and the environment will not suffer.” The Greens council candidates said that they did not support “this fl awed system which is all about making property development easier, and not about protecting the environment”.