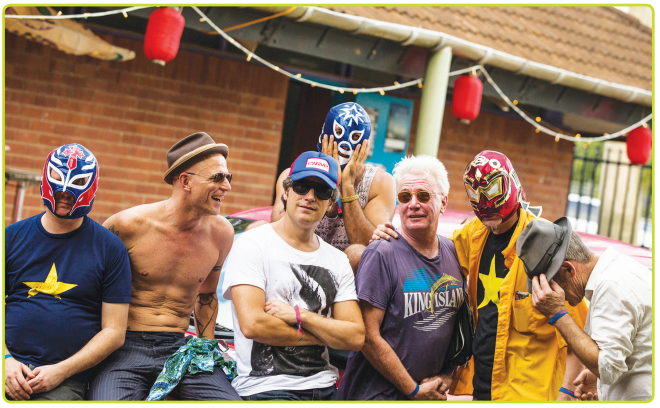 It’s another historical moment in The Rhythm Hut history, as staff, volunteers and the community celebrate a milestone four years in their space in Faunce St, Gosford.
The Hut’s birthday party is its biggest event of the year, and on August 19, it will welcome Ash Grunwald as headliner, supported by local legends, Rhythm Hunters, Tullara, a DJ, and of course the fabled Rhythm Hut drum circle.
Dinner, drinks and desserts will be available on the night and The Rhythm Hut is an all ages fully licensed venue, within a two-minute walk to public transport, including trains, buses and taxis.
In four years, the Hut has seen substantial changes, the first of which was the addition of walls and roofing to the then abandoned building.
In its current state, the Hut is a multi-faceted cultural hub.
The Hut hosts everything from music and yoga classes, through to creative workshops, book launches, film screenings, fundraisers, and of course, huge live music events featuring National and International acts like Natali Rize (Blue King Brown), Tijuana Cartel, OKA, Wes Carr, Wild Marmalade, Katchafire, Melbourne Ska Orchestra and more.
Headliner, Ash Grunwald, has been praised for his guitar playing and creative blend of blues and roots, for over a decade.
Taking cues from classic bluesmen such as John Lee Hooker, Grunwald brings his sound into the 21st century with modern rock and soul influences and a hat-tip to contemporaries such as John Butler.
Grunwald has been nominated for five ARIA Awards, two APRA Awards and attracted large crowds at Bluesfest, Falls and Woodfood Folk Festivals.
Rhythm Hunters are a dynamite force in the world of roots music, known for their frenetic drum choreographies and infectious dance grooves, fusing physical percussion, western horns, Asian flute and electro beats, making them one of Australia’s most exciting festival acts.
Drawing influence from Australasia and Indonesian cultures, Rhythm Hunters traverse genres including world, folk and electronic.
This year will see them produced by Nicky Bomba, before touring Australia and Indonesia.
Twenty-three-year-old Australian singer/songwriter, Tullara, has quickly developed a reputation as one of the country’s brightest up and coming performers.
Renowned for her guitar playing, her sound is raw and honest, yet complex and intricate.
After winning Triple J Unearthed Spotlight Artist of the week, she caught the attention and praise of John Butler, who proclaimed: “Tullara has a way with words and a way with that guitar.
“She’s a gifted artist just at the beginning of what looks to be a promising adventure ahead.”
This is a ticketed event open to all ages.
Minors must be accompanied by an adult.
Festivities kick off from 6pm.