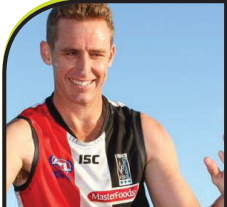 It was a special game for the Panthers’ legendary player, Peter Van Dam, who played his 300th game for Terrigal Avoca.

The Panthers shone in the second quarter of the match, kicking seven goals to one, to have the game secured at halftime in front of a healthy crowd commemorating Van Dam’s milestone match. In a pleasing sign for coach, Mark Skuse, the Panthers had 12 individual goal kickers, led by Brendan Harper, Dan Heuston and Sam Ellis, with three goals apiece. Van Dam also kicked one goal to cap off a momentous day for a great clubman and leader. Terrigal Avoca were triumphant winning by 115 points. Final scores were Terrigal Avoca 21.16.142 to Killarney Vale 4.3.27. Terrigal Avoca’s best players were Brendon Sarich, Dan Heuston, Chris Bishop, Sam O’Brien, Brendan Harper and Mark Skuse.

The result sees Van Dam join club mates Ken O’Brien and Dave Grimmond as the only Panthers in history to have played 300 games for Terrigal Avoca. “You don’t get into sports looking to achieve milestones, but getting to 300 means that I have stuck around for a long time,” Van Dam said. “It was a big day for my family and the club,” he said. Van Dam has played his entire career at Terrigal Avoca. “I played Rugby League from the age of 5, and came across to Australian Rules when I was 13, and never looked back,” he said. Van Dam’s 300 games do not include his junior football, so his achievement is a massive one. When asked about his playing future, Van Dam said he intended to retire at the conclusion of the 2017 season.

“This is it for me. “My wife Nyssa is due to give birth to our third child in about four weeks, so my family needs to start taking priority,” Van Dam said. In speaking about the 2017 Panthers’ Black Diamond Cup side, who have only lost one game in the season, Van Dam said that in recent weeks, the Panthers have found it hard to get the same team on the paddock each week and they hoped to have a steady 22 leading into the Finals Series.

“Dan Heuston is in his fi rst year with us and he has been a shining light. “He’s just a good all-round sportsman; he’s a good cricketer and also played Rugby League last year and enjoys being around the boys,” Van Dam said. Van Dam also mentioned that young, experienced players like Jack Grimmond and Corey Billins were playing consistent footy, along with the White brothers, Xander and Lachlan. Van Dam was complimentary towards the Terrigal Avoca back six, who have put the clamps on virtually every forward line they have come up against. “They would have even less scored on them if they went wide with their rebounding, but they have the guts to take on the game straight through the spine. “In my eyes, Jayson (Van Dam) is still the best backman in the League, and he’s playing at centre-half forward for us.” In his last season, Van Dam stated that he was enjoying playing alongside his brother and helping guide and mentor the club’s younger players.