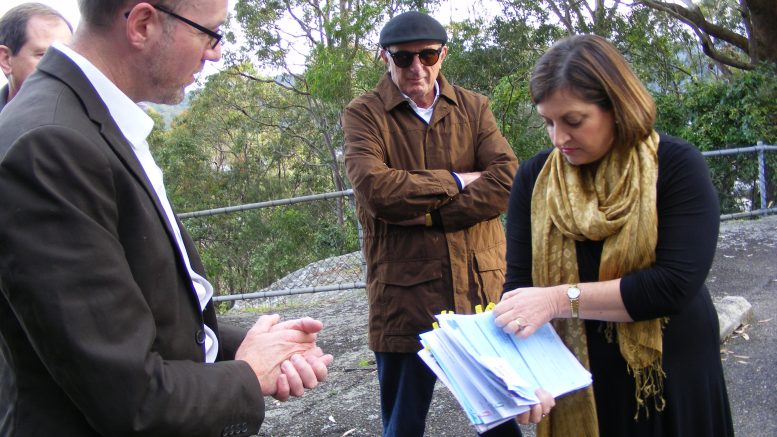 Ms Joy Cooper with the correspondence she has received from Council

NSW Shadow Minister for Local Government, Mr Peter Primrose, said he would ask questions in budget estimates in August regarding the “secrecy” surrounding monies held in trust by Central Coast Council.
At least one local resident has been attempting, since March, to view the Council’s statement of monies held in trust, but her requests have been rejected by Central Coast Council.
According to the NSW Local Government Act of 1993, all councils in NSW are required to have two funds: a consolidated fund and a trust fund.
Section 409(1) of the Local Government Act 1993 says that all money and property received by a council is held in the council’s consolidated fund unless it is required to be held in the council’s trust fund.
Section 411 goes on to explain that “all money and property received by a council in trust must be held in the council’s trust fund; and money or property held in the council’s trust fund must be applied for the purposes or in accordance with the trusts relating to it”.
The audited accounts of the former Gosford Council for the period July 1, 2015, to May 12, 2016, included the statement: “The following entities have been included as part of the consolidated fund: general purpose operations; Gosford Water Supply Authority, established under the Water Management Act 2000; Somersby Industrial Estate; committees established under the Local Government Act 1993 S355.
“In accordance with the provisions of section 411 of the Local Government Act 1993 (as amended) a separate and distinct Trust Fund is maintained to account for all money and property received by Council, in trust, that must be applied only for the purposes or in accordance with the trusts relating to those monies.
“Trust monies and property subject to Council’s control have been included in these statements [referring to the audited statements presented to Administrator, Mr Ian Reynolds, on Monday, June 19].
“Trust monies and property held by Council, but not subject to the control of Council, have been excluded from these statements.
“A separate statement of monies held in the trust fund is available for inspection at the council office by any person, free of charge.”
The same statement was included in the draft financial statements from the former Gosford Council when they were first tabled at an extraordinary meeting of Central Coast Council meeting on March 13.
Since March 13, Ms Joy Cooper of Green Point, has been asking to exercise her right to inspect that “separate statement of monies held in the trust fund” but, as of July 11, Central Coast Council had not allowed the inspection to take place.
Ms Cooper is also a community representative on the former Gosford Council’s Protection of the Environment Trust, which Central Coast Council has expressed an intent to wind up.
She said she had very limited knowledge of what money Central Coast Council should keep in its trust account, but did not understand why, if its financial statements clearly stated “any person” could inspect the statement of monies held in trust, the council was stonewalling her attempts to do so.
Ms Cooper commenced her lengthy period of correspondence with Central Coast Council by sending straightforward email requests to ask@centralcoast.nsw.gov.au and calling council’s public telephone number.
Her first phone call was on March 14, followed by an email on March 19, to which she received an automated response.

By April, Ms Cooper had started to address her correspondence directly to the CEO, Mr Rob Noble, and Administrator, Mr Ian Reynolds.
She has since spoken at two community forums held prior to Central Coast Council ordinary meetings called to deal with the accounts of the former Gosford Council.
She has attended the Council’s Gosford chamber and, recently, has submitted an informal Government Information (Public Access) Act (GIPA) request to view the statements.
She has called the ABC Central Coast breakfast show to ask Mr Reynolds for assistance in viewing the statements.
On July 5, Mr Brian Glendenning, as Acting Chief Executive Officer, responded to Ms Cooper’s GIPA request.
“While I think I understand the information you have requested in your emails and in your Informal Request under the GIPA Act, it seems to me that what you actually are seeking to achieve is to confirm that Council is appropriately keeping any trust monies in an appropriate account and to confirm that, where trust monies have been expended, that those monies have been expended in accordance with the permitted trust purpose.
“It would be useful to sit down with you, or have a telephone conversation with you, to understand exactly the information that you want, and provide you with a firm (and near) date when that information can be provided to you.
“This more targeted approach might significantly shorten the time it takes to provide you with the information you need, which seems to be a subset of the broad range of documents you have sought in your Informal Request under the GIPA Act,” Mr Glendenning said.
In response to Mr Glendenning, Ms Cooper said that she did not believe she should be required to explain her reasons for wishing to see the statements and simply wished to “avail myself of the invitation put by council to view the accounts”.
Coast Community News has asked Central Coast Council, the NSW Office of Local Government (OLG) and Mr Primrose to clarify whether Ms Cooper’s request to review the statement of monies held in trust by the former Gosford Council is reasonable and why it would not be fulfilled by Central Coast Council.
“If the constituent does not receive satisfactory answers from the OLG, then I will raise these concerns with the Minister in budget estimates next month,” Mr Primrose said.
“At the very least, if the forcibly-merged Council is claiming this information should be kept secret, then it has to give a valid explanation as to why this is the case,” he said.
“The default position should be openness and transparency.”
Coast Community News asked the NSW Office of Local Government to provide some indication of the types of money that would be required to be kept in a council’s trust account.
It responded: “The Local Government Act 1993, the Local Government (General) Regulation 2005, and the Local Government Code of Accounting Practice and Financial Reporting provide the framework for councils to undertake financial reporting.
“The Local Government Code of Accounting Practice requires councils to report on the level of externally restricted funds which are those that can only be used for specific purposes.”

In response to the question of why Central Coast Council would state clearly that the statement related to monies held in trust can be inspected by any person and then prevent a resident from inspecting those statements, OLG said: “This is a matter to which Council should respond”.
On the question of whether or not residents of NSW should be able to inspect a council’s statement of monies held in trust, the OLG referred Coast Community News to the GIPA Act.
Central Coast Council provided a written response to questions.
“There is no separate annual statement of monies,” the statement said.
“There are series of statements of monies, which were presented to the members of the trusts, and the minutes of the meetings of the trusts were then reported to the former Gosford Council (at least three times each year) and more recently to this Council.
“The reports to the former Gosford Council meeting, and more recently this Council, are public information available from the Council’s website.”
Coast Community News has asked for specific links in order that the public can find the information with ease.
“Council suggested a meeting with Ms Cooper, to attempt to clarify what other information she required given the broad terms of her pending GIPA request, and statements made by her in the media.
“Council is still prepared to meet with Ms Cooper, as it would like to resolve the issue with her.
“Phrases appear to have been taken from Note 1 on page 29 of the business paper for the Extraordinary Meeting of Council on March 13, which is page 13 of the Financial Statements of the former Gosford Council, for the period from July 1, 2015, to May 12, 2016.
“The purpose of those phrases, in that context, was to identify the trust monies and assets that were included in the Financial Statements … which were prepared as required under the accounting standards and codes prescribed under Local Government Act 1993.”
Coast Community News has subsequently asked Central Coast Council to clarify whether the statement “A separate statement of monies held in the trust fund is available for inspection at the Council office by any person free of charge” was included in the Gosford Council accounts in error.
Another possibility is that all monies held in trust are “controlled’ by council and therefore form part of the consolidated fund, hence the trust fund balance is $0.
Clarification has also been sought from Council on that possibility.
The NSW Audit Office has also been contacted for clarification of a Council’s responsibilities in relation to monies held in trust.

Council appears impotent in the face of recalcitrant business operators