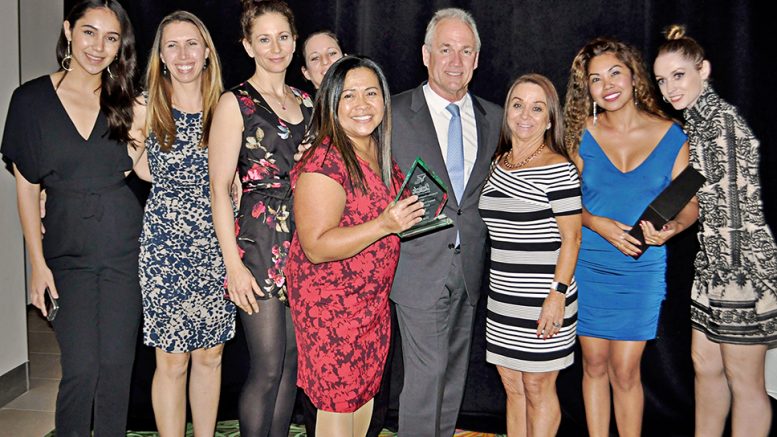 Matthew Wales and crew from Advanced Skin Spa, winners of the Chamber Excellence in Small Business, 2017.

Woy Woy lawyer Mr Darrell Pannowitz, Peninsula Village chief Mr Shane Neaves and Brisbane Waters Private Hospital community relations manager Ms Petrina Waddell have been presented with business awards by the Peninsula Chamber of Commerce.
The President’s Award for Community and Business Excellence was presented to Mr Darrell Pannowitz for his tireless effort over 30 years to the legal profession and his community work with Peninsula Village and the Men’s Shed.”
Other notable winners were Mr Shane Neaves from Peninsula Village and Ms Petrina Waddell from Brisbane Waters Private Hospital, both winners of two awards.
Mr Neaves won both the Business Leader (aged 36 plus) award and, for Peninsula Village, the Employer of Choice award.
Ms Waddell accepted the Excellence in Innovation Award and the Excellence in Business Award on behalf of the hospital.
Peninsula Chamber president Mr Matthew Wales congratulated the nominees and winners of the awards.
“The calibre of entries this year was exceptional and highlights then diverse range of high quality businesses that are successfully operating on the Peninsula.”
Mr Wales said the Peninsula business community was fortunate to have such high quality business in each of the areas three town centres.
The Peninsula award winners will advance to the Regional Business Excellence Awards in September.
From there they will have a chance to progress to the NSW Business Awards later in the year.
The Peninsula judging and presentation night was held at Ettalong Diggers Memorial Club.