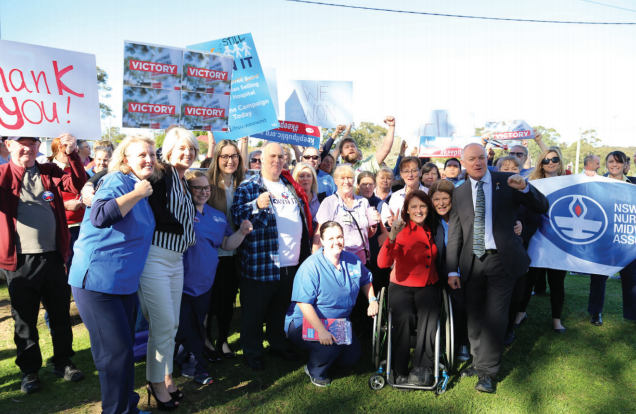 A public-private partnership to redevelop and manage Wyong Hospital will not go ahead. On Thursday, July 6, NSW Minister for Health, Mr Brad Hazzard, said the $200 million Wyong Hospital redevelopment would have a “Government-led approach”.

“The announcement follows extensive consultation with staff at Wyong Hospital, as well as the local community, to determine the best way to deliver the upgrade,” Mr Hazzard said. “Work to prepare for the redevelopment has continued while options for models of delivery were considered, and we are moving full steam ahead to deliver for the community,” he said. “I’m also delighted to report that on-site activity will start this year, with the fi rst stage to include extra car parking.

“This will ensure construction will commence as planned in 2018, and in line with the Government’s commitment. “I know fi rst-hand from the conversations I’ve had with people in Wyong that they are excited to see a redeveloped hospital become a reality, so we will get on with the job.” Member for Wyong and Shadow Minister for the Central Coast, Mr David Harris, declared the NSW Government decision a victory for the Wyong community.

“After nine long and uncertain months of a hard fought community campaign, the Liberal Government has fi nally conceded to the will of the people and abandoned their unfair and unjustifi ed plan to privatise our Wyong Hospital,” Mr Harris said. “Wyong Hospital is held in high regard in our community and there is a deep sense of local ownership, given the historical fundraising to secure the original hospital by the community,” he said. “In my entire life, I have never seen an issue which has galvanised our community so strongly. “This is a win by our community, for our community.

“It was a fight we all knew we needed to have and it has been fantastic to work with the passionate community members, the Health Services Union, the Nurses and Midwives Federation, and Unions NSW to reach this result. “This win will mean certainty for staff and our community. “It has shown that when we work together and get behind an issue, we can beat the power of a Government that thought they could get away with holding us in such contempt,” Mr Harris said.

He also praised NSW Labor MPs for organising major community petitions opposing the privatisations, forcing the debates in the State Parliament. Unions welcomed the decision to abandon privatisation of Wyong Hospital, but vowed to keep campaigning against privatisation of others in the state, including Maitland. “It’s heartening to see the Government acknowledge what hospital workers and the broader community have known all along, that privatisation only serves the interests of large corporations,” said Mark Morey, Secretary of Unions NSW.

“Privatising a vital asset such as a hospital, is a license for large foreign corporations to gouge money from our communities. “It means the new corporate owner has to fi nd a profi t by either sacking staff or cutting patient care. The NSW Nurses and Midwives’ Association (NSWNMA) said ten months of campaigning alongside community members, public health advocates and local health workers has successfully ensured the redeveloped Wyong Hospital would remain in public hands. General Secretary of the NSWNMA, Mr Brett Holmes, congratulated Mr Hazzard for making the only sensible decision. “Without a doubt this is a welcome result and indicates that common sense can prevail when governments are prepared to listen to all stakeholders,” Mr Holmes said.

“The previous Health Minister made a serious error in judgment when she announced last September that Wyong Hospital would be redeveloped under a public-private partnership without consulting staff, community members or health unions. “There is overwhelming evidence showing publicprivate partnerships are an expensive, ill-fitting model when it comes to the health sector,” he said. “After allocating $10 million in last month’s budget to the hospital’s redevelopment, the State Government must now fast track the remaining $190 million to ensure the upgrades are delivered on time.

Greens Health spokesperson, Ms Dawn Walker, called on the NSW Government to drop all plans to privatise hospitals in NSW. “The Greens welcome the decision to fi nally abandon the Wyong Hospital privatisation and are calling on the NSW Government to stop the Americanisation of our public health system by ending all plans to privatise hospitals across NSW,” Ms Walker said. “This is a fantastic victory for the community on the Central Coast who have come together to campaign through people power against the Government’s misguided attempt to sell off their hospital. “Publicly run hospitals can deliver medical services more efficiently and cheaply, and will continue to do complex and costly medical procedures, even when they don’t return a profit,” she said.

More eager to get vaccine as COVID cases climb